According to Deutsche Welle, the European Parliament resolution denounces the arrests of people who criticized Turkey's military intervention in Afrin, Syria.

As we reported to you last week Turkish security forces detained hundreds of journalists, doctors and regular citizens who have been critical of the operation.

Read more at >> here <<
★ Secretary of Defense James Mattis said on February 9 he will meet with his Turkish counterpart Nurettin Canikli in Brussels next week amid U.S. concern over Turkey's plans to launch a military operation in Manbij, Syria, reports the Hürriyet Daily News.

The U.S. will continue to work with Turkey at "the highest levels and all the way down through the military level," Mattis told reporters during a visit to the Pentagon's press office.

Washington has voiced concern about the safety of U.S. troops in Manbij amid Turkey's ongoing operation in northeastern Syria.

There are about 2,000 American soldiers in Manbij, reports the Anatolia News Agency.

Mattis said there has been no change in terms of Turkey's pressure on Manbij in response to a question about Turkey's concern over the presence of the People's Protection Units (YPG).

"Obviously, there is a lot of concern there because of what we heard out of Ankara. But right now, our goal is to keep the pressure on [through] the counter ISIS campaign and keep the campaign going," Mattis said, describing Turkey's planned military operation in Manbij as a "distraction" from the fight against the Islamic State of Iraq and the Levant (ISIL).

"Turkey has legitimate concerns, and the U.S. is working with Ankara. But at the same time, Washington wants to stay on Daesh right now," he added, using an Arabic acronym for ISIL.

★ Also according to the VOA, U.S. National Security Adviser H.R. McMaster is due in Turkey this weekend, as a potential military confrontation looms between the two countries over Syria.

Turkish Foreign Affairs Minister Mevlüt Çavuşoğlu this week lambasted Washington, accusing it of making deals with Islamic State militants and claiming his government has lost confidence in its alliance with the U.S., VOA adds.

Such verbal assaults against Washington by Turkey's political leadership are almost a daily occurrence. A recent poll found only three percent of Turks trust the United States, VOA writes.

Also the areas taken under the control of the Turkish-backed Syrian rebels in northern Syria could immediately be used for refugee resettlement even if the rest of Syria is at war, officials indicate.

According to the Hürriyet Daily News reporter, Fevzi Kızılkoyun a recent survey indicates that 80+ percent of Turks from all political affiliations want the Syrians to go back.

★ Turkey's President Recep Tayyip Erdoğan is considered to be the most litigious one in the history of the country. Analysts are saying that he's using lawsuits to muzzle his political opponents.

The latest news is that Mr. Erdoğan is suing the main opposition Republican People's party leader Kemal Kılıçdaroğlu over an alleged "attack on personal rights," for a speech the latter gave in a parliamentary group meeting. Mr. Erdoğan is demanding roughly around $65,000 in local currency.

Selim Temurci's resignation comes after the replacement of the Justice and Development Party heads in the provinces of Aksaray, Hakkari, Şırnak, Ağrı and Muş last year. A In a bid to be better prepared for the local elections scheduled for March 2019, a number of Justice and Development Party mayors across Turkey were also forced to resign by the party, including Ankara Mayor Melih Gökçek and Istanbul Mayor Kadir Topbaş, as well as the mayors of Bursa, Balıkesir, Niğde and Düzce.

Turkey's President and the Justice and Development Party leader Mr. Erdoğan openly said that the party was working on a "restructuring program for the 2019 elections".

Meanwhile, a number of bureaucrats working in different ministries were shuffled, the Anatolia News Agency reported on February 9.


★Additional headlines:
- Turkey's President Erdoğan met with Pope Francis during Rome visit on February 5, the first visit to the Vatican by a Turkish head of state since 1959.

- The Netherlands recalled its ambassador from Turkey on February 5. The recall arises from the spat between the Netherlands and Turkey stemming from the Dutch refusal to allow Turkish ministers to campaign for a 2017 referendum. The Dutch foreign affairs ministry said repeated efforts to normalize relations have failed. Read more at >> here << 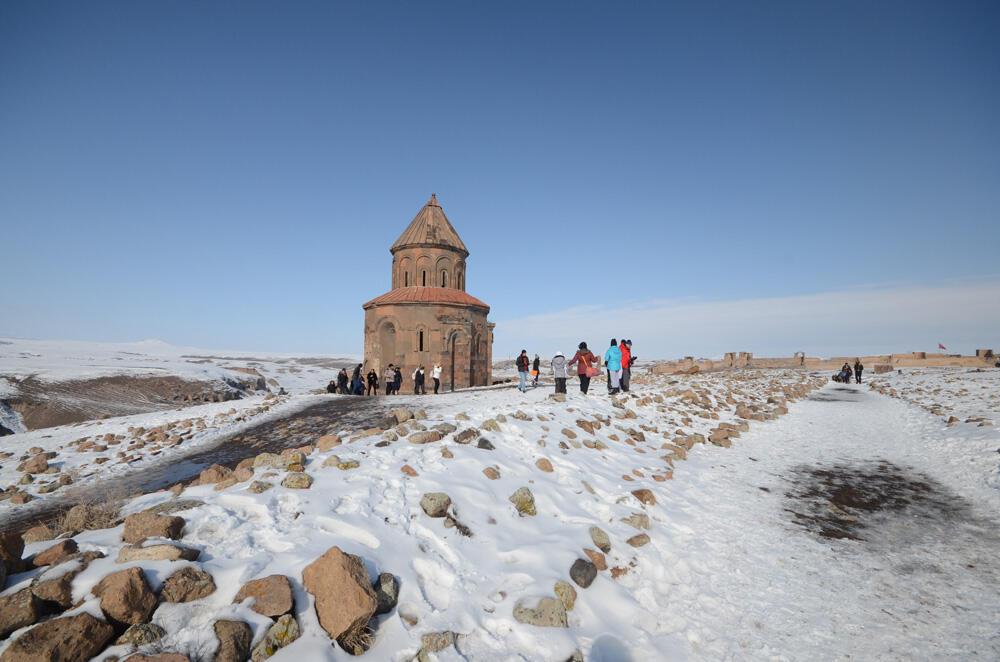 ★ A nostalgic train line from the Turkish capital Ankara to Turkey's eastern province of Kars has tripled the number of people visiting the ancient city of Ani, once the seat of an Armenian kingdom and now on the UNESCO World Heritage List, reports the Anatolia News Agency.

Located close to the Arpaçay district on the Turkish-Armenian border in Kars, Ani was the capital of Armenian royalties between 961 and 1045 A.D. at the time of the Bagratuni Dynasty. Home to 11th and 12th century structures of Islamic architecture, Ani entered the tentative UNESCO World Heritage list in 2012 and the permanent list on July 15, 2016.

The first settlement in Ani dates back to the 3000 B.C.; it later became home to many civilizations including the Saka Turks, Sassanian, Bagratuni Dynasty, Byzantines, Seljuks, Ottomans and Russians. 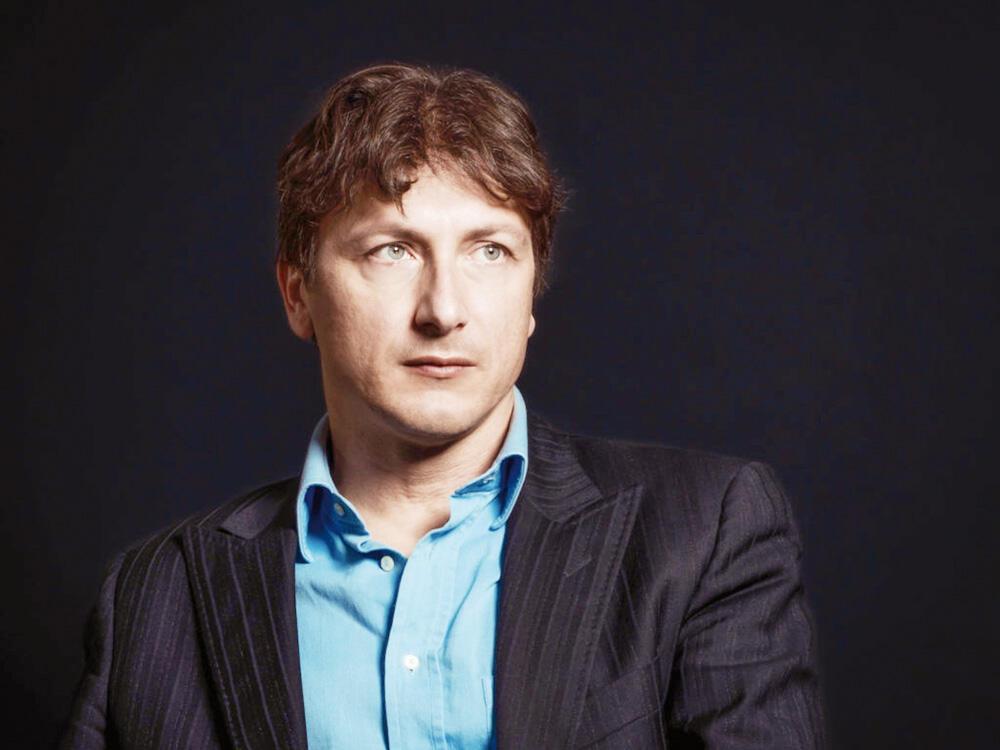 ★ Turkish pianist Gülsin Onay and the Italian pianist Francesco Libetta performed at a concert on February 9 at the Lütfi Kırdar Convention and Exhibition Center in Istanbul.

The two pianists were accompanied by the Istanbul State Symphonic Orchestra on the stage.

Ms. Onay, who previously performed the sonata with Marc-Andre Hamelin, Hüseyin Sermet and Anika Vavic, said: "We have also performed this work with Libetta in Ankara with the Bilkent Symphonic Orchestra. He is an awesome pianist. Now we will come together once again." 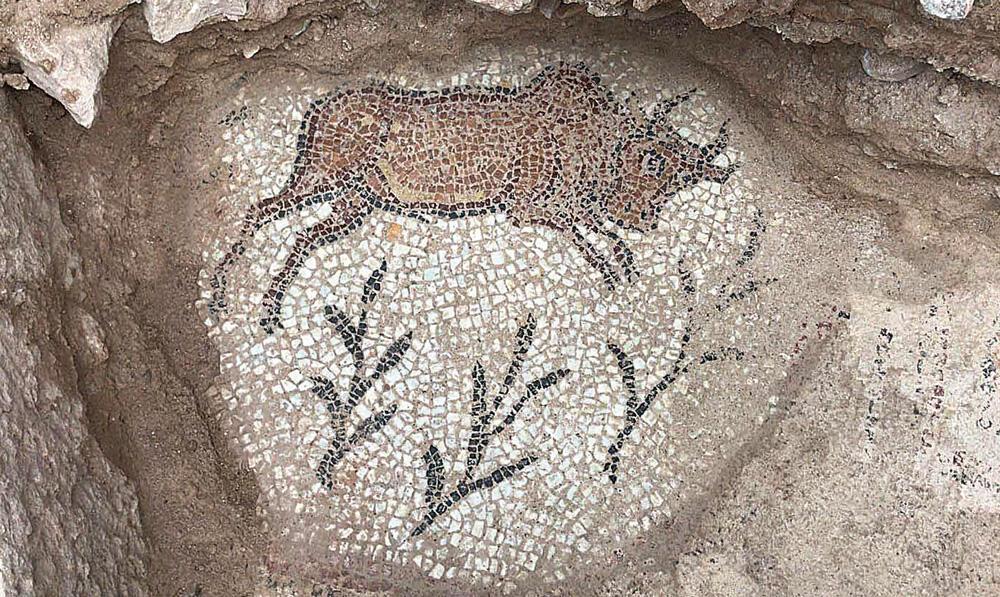 ★ A 1,500-year-old structure believed to be one of the earliest churches in Anatolia, the Asiatic part of Turkey, has been unearthed during archaeological excavations in the ancient city of Hadrianapolis (Paphlagonia) in the Black Sea province of Karabük's Eskipazar district.

Experts believe Hadrianapolis was established in the first century and served as a settlement until the eighth century.

Excavations for the structure have been continuing under the direction of Kastamonu Museum.

General excavations in Hadrianapolis itself started in 2003.

Mr. Kurtulmuş said a team within the General Directorate for Cultural Heritage and Museums is closely following all collections and auctions in Europe to see if any artifact smuggled out of Turkey is being exhibited or sold. If they detect any, the Culture and Tourism Ministry works in collaboration with the Foreign Ministry to get them back through diplomatic channels.

★ Speaking of smuggled artifacts, according to Özgen Acar of the Hürriyet Daily News, a Tykhe (goddess of fortune) sculpture, which has been smuggled from Turkey's southern province of Antalya's Perge, has been reported to be at the Royal Museums of Fine Arts of Belgium in Brussels.

Turkey's ministry of culture and tourism contacted the Museum in Brussels in 2016, but the Museum authorities say that they had no intention of returning the sculpture, since it was added to the Museum collection in 1968 before the 1970 UNESCO convention. 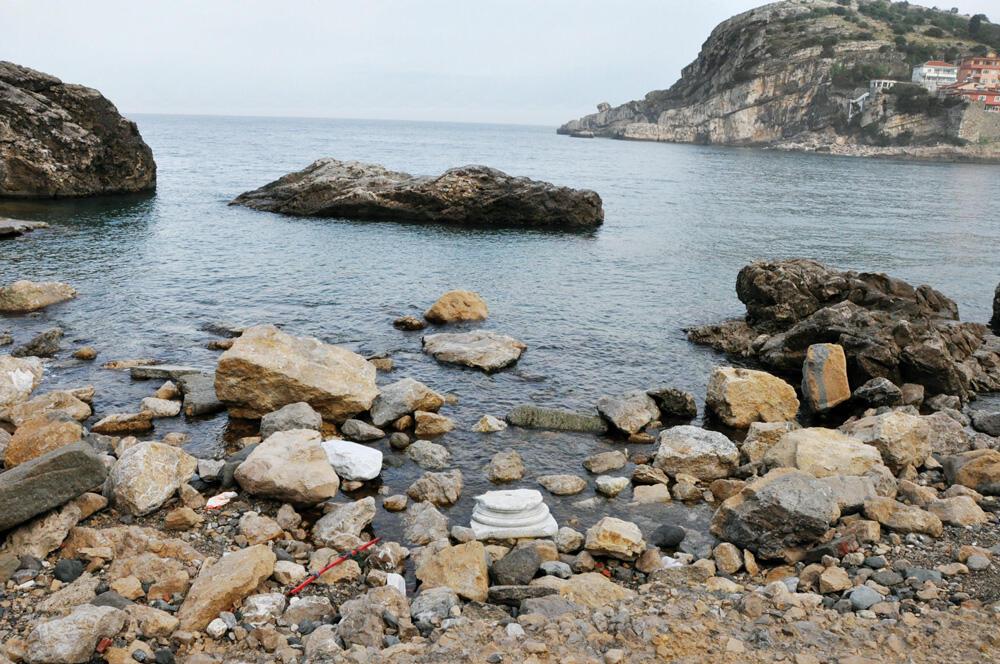 ★ Pieces of tombs and columns have washed up on the shores of the Amasra district in Turkey's northern province of Bartın following waves caused by a storm.

Residents, who saw the historical artifacts around the shore in the harbor, informed the Amasra Museum Directorate in the city. Following an examination, museum officials said the pieces might come from the Roman era.

Amasra Museum Director Baran Aydın said they believed the artifacts were dumped in the sea with the debris from a construction site many years ago.

★ As part of its ongoing adoption campaign, the World Wildlife Fund's Turkey office has called on people to "adopt an animal" on February 14, Valentine's Day.

"You could give your loved ones a world where human beings live with nature peacefully," it stated. 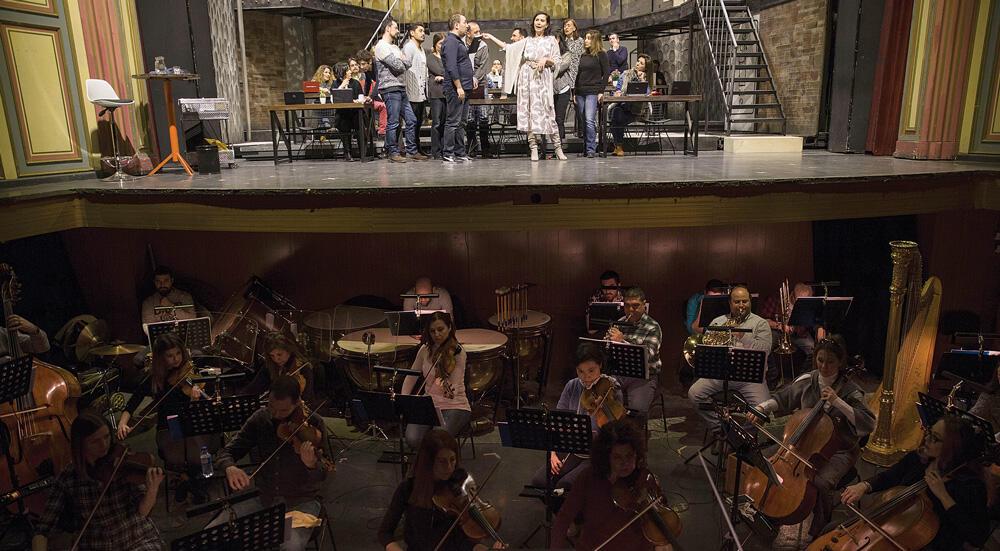 ★ Gaetano Donizetti's opera "The Elixir of Love" that revolves around the lives of office workers is being staged by the Ankara State Opera and Ballet, reports the Anatolia News Agency.

The Opera was first stage in Milan in 1832. Figen Karakelle is directing the Turkish version.

Speaking to Anatolia News Agency, Karakelle said their adaptation was different. "This time 'The Elixir of Love' is a love story set in today's world. Actually, the love story is always the same. It is the oldest story in the world. Therefore, there is no dramaturgical difference between using a village in the 19th century and an office in the 20th century. There is only visual and sensual difference," she said.

Karakelle's adaptation premiered in the Turkish capital on February 3. 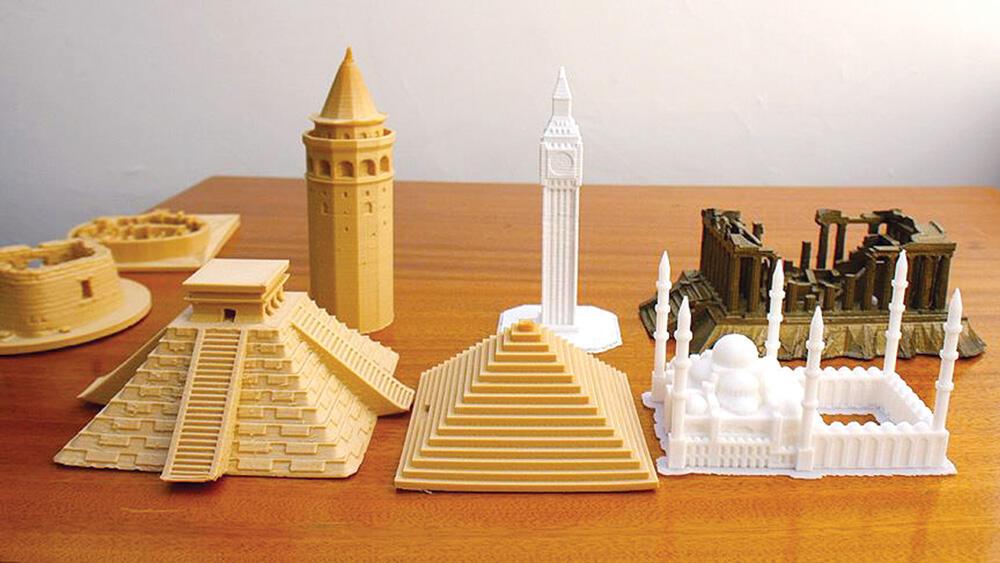 ★ Thanks to a project developed by academics at Anadolu University in the Central Anatolian province of Eskişehir, significant artifacts in museums around the world have been printed with 3D printers for the benefit of visually impaired people, reports the Anatolia News Agency.

The artifacts are also presented with descriptive cards written using the Braille alphabet.

The project is based on a global project called "Scan the World," in which museums across the world scanned their best known artifacts and put them into the digital environment.

Here is a link to the 3-D images that you can print from Turkey: Read more at >> here <<

★According to the publication Hospitality Ireland, Istanbul is back on the map for European summer travelers.

Europeans' favorite destination for the past two years, Spain, is getting more expensive and the tour operators are shifting more capacity to Eastern Mediterranean locations like Turkey and Egypt, the article writes.

EXCHANGE RATE for the U.S. dollar in Turkish Liras: 3.82
WEATHER

* Results for week: 20 * In games played so far this weekend: * Standing in the league as of week ending 20
ANNOUNCEMENTS

Big thanks to Emrah Gures, the owner of the Asteria Grill, for his support. He prepared this menu for us: Kofte, sigara boregi, dolma, acili ezme, babaganus, humus, coban salata, beyaz penir, kavun, baklava.

Childcare is available for a minimal fee per hour.

For more information please contact Nurdan Civi at (925) 818-0490 or AlaturcaConnection@yahoo.com

This event is supported by Turkish Philanthrophy Funds and sponsored by Aydin and Hulya Koc and, Hakan and Nurdan Civi.