★ A group of activists started a petition on change.org to change the borders of Turkey's southeastern province of Batman, to resemble the Batman.

The name of the province is written identically to the movie hero but pronounced slightly differently, but the activists don't see that as an impediment.

The Federal Statistical Office said Wednesday that 51 percent of those people were German citizens. It defines a person with an immigrant background as someone who either wasn't born a German citizen or has at least one parent who wasn't.

★ Syria's envoy to the United Nations on Tuesday railed against Turkey's growing influence in the north, calling it an "occupation" and vowing to "expel" its troops.

Turkey, a main backer of Syria's opposition, has sent troops into northern Syria to battle the Islamic State group and Kurdish militants. It has also deployed troops in the opposition stronghold of Idlib as part of a de-escalation agreement with Iran and Russia, both of which are close allies of the government.

★ Turkey says it strongly protests the decision by the United States to impose sanctions on two of its government officials over the detention of a U.S. pastor accused of aiding terrorists, reports the VOA.

Turkey's foreign ministry said Wednesday that the decision "neither complies with state seriousness, nor is it explicable within the terms of law and justice."

The statement encourages the United States to reverse its decision and promises "an equivalent response to this aggressive attitude will be given without delay."

The statement late Wednesday followed an announcement by the U.S. Treasury Department that it has targeted two Turkish government officials for sanctions following Turkey's refusal to release U.S. Pastor Andrew Brunson from house arrest ahead of his trial.

The Treasury Department announced the move Wednesday, saying Justice Minister Abdülhamit Gül and Interior Minister Süleyman Soylu are the targets of the sanctions that will freeze any U.S. assets owned by the two men and prohibit U.S. citizens from making financial transactions with them.​

★ According to Reuters Turkish steel makers are looking to expand in West Africa and other emerging markets in response to tariffs and planned quotas which threaten their sales to the United States and the European Union, a senior sector official said.

★ Deepening rifts between Turkey and the United States are fueling speculation Turkey is being given further impetus to strengthen ties with nearby Russia, Dorian Jones of the VOA writes.

Senior Turkish officials met with their Russian and Iranian counterparts Monday in Russia's Sochi sea resort as part of ongoing cooperation among the countries over resolving the Syrian civil war.

"We can go our own way," Turkish media Sunday quoted President Recep Tayyip Erdoğan as saying. "The U.S. could lose a loyal and valuable ally," he added in response to U.S. threats.

This month, the Netherlands restored full diplomatic relations with Turkey after a bitter spat between the countries' leaders.

For more than a year, relations between Turkey and Europe have been in the deep freeze. Erdoğan frequently engaged in rhetoric aimed at infuriating European leaders, often accusing them of behaving like Nazis. Turkey's detention of European nationals, particularly German citizens, often without charge, strained relations with Berlin to the breaking point.

Led by Germany, Europe had taken an increasingly assertive stance toward Turkey, with threats of financial and economic sanctions.

"The reason why bickering between Turkey and the EU stopped — the EU has finally reached conclusions about how to deal with Turkey, and Erdoğan realized he couldn't push the EU around," said political analyst Atilla Yeşilada of Global Source Partners. ★ Visionary Turkish mathematician Ali Nesin became the third person ever to be awarded the Leelavati Prize on August 1 at the International Congress of Mathematicians (ICM) in Rio de Janeiro. The award, which recognizes outstanding contribution to outreach in mathematics education honors Nesin's mathematics village, which opened eleven years ago in a remote region more than 600 kilometers from Turkey's capital.

Nesin's Village of Mathematics' settings are steeped in history, just a few kilometers away from ruins of the Greek and Byzantine eras in the towns of Şirince and Selçuk. But the initiative, which runs both short-and long-term math courses, open-air discussions and university summer camps, is creating a new legacy for the area, bringing it to international prominence.

Offering a chance for students to engross themselves with learning, research and intellectual exchanges, a special committee of the International Mathematical Union (IMU) believes that the Nesin Village of Mathematics represents a milestone in increasing public engagement and interest in mathematics.

While Nesin, 60, was unable to attend the ceremony to receive his award in person, IMU President Shigefumi Mori praised the Village for Mathematics as an "exceptional, peaceful place for education". Nesin will instead receive the Leelavati Prize at a special ceremony at the ICM 2018, set to take place on August 8.

The son of eminent Turkish writer, comedian and satirist Aziz Nesin, Ali Nesin left behind a career as an associate professor at the University of California when his father asked him to take over the non-profit organization which he had started, the Nesin Foundation. The Foundation works to provide shelter for children at social and economic risk, providing housing and education until they complete university. 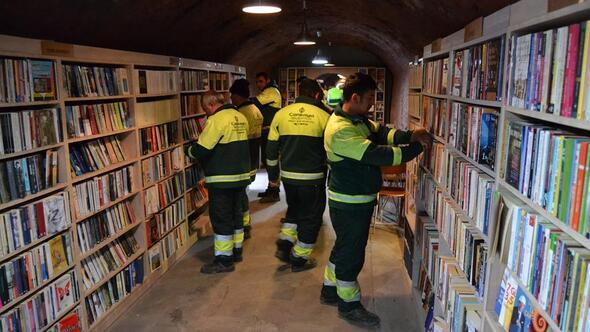 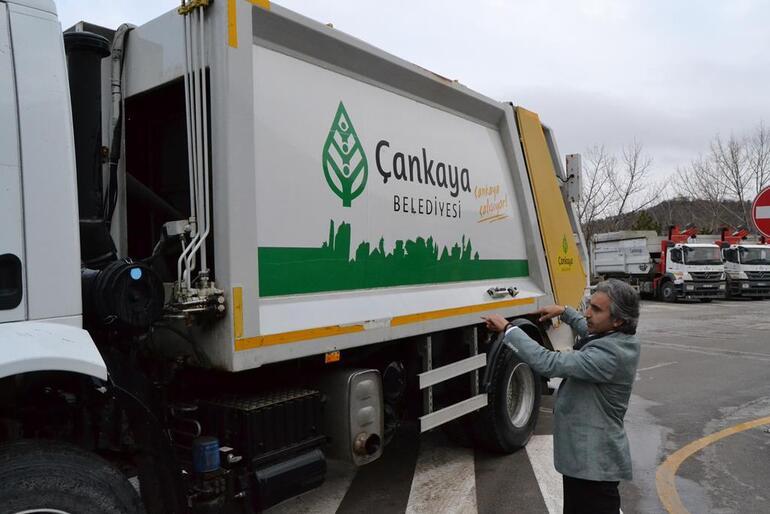 ★ The municipal garbage collection service workers in Ankara's Çankaya city are establishing an interesting library. They are saving the books they recover from garbage and are given it to a mobile library converted from a garbage truck.

The mobile library will hit the road with 1500 books in 17 categories which include World classics, Turkish literature, politics and personal development.

The garbage workers have one other goal: To start libraries in village schools. For this they are collecting book donations.

The trio presented folksongs and hymns from the seven regions of Turkey. This is their first international prize.

Musician's from 10 countries participated in the Festival.

★ The Gramophone magazine nominated an album by Turkish pianist and composer Fazıl Say for a prize.

The album is titled "Secrets" and features works from Debussy, Ravel and Fazıl Say himself. Mr. Say has Collaborated with French mezzo-soprano Marianne Crebassa in the album.

★ Renowned Turkish director Nebil Özgentürk has prepared a short film titled "Sweet and bitter homeland - I passed among you with sadness" for his documentary "The Diary of the Migration to Germany".

The film tells the difficulties the Turkish workers had when they migrated to Germany in 1960s.

Due to the shortage of labor in post World War II era, Germany recruited what it termed "guest workers" from Turkey in 1960s. These workers were supposed to be in Germany for a temporary period. However, many of them stayed and brought their families, making up the largest minority in Germany now.

★ The 25th International Adana film Festival will take place this year between September 22 and 30.

A new poster for the Festival is ready. The poster emphasizes the history and cultural values of Adana, and shows the photographs of many late artists who contributed to the Turkish film.

In exchange, the Adana Film Festival will engage the movie theaters to show Dutch films, and invite the Dutch filmmakers to participate in the Festival.

The prize is one of the four major prizes of the Festival.

The mayor of Antalya Menderes Türel from the ruling Justice and Development Party eliminated the "National Competition" section from the Festival last year. The elimination of the section drew the ire of the Turkish film organizations.

In a joint declaration 21 foundations, associations and professional organizations said their efforts to reintroduce the "National Competition" section have not been fruitful, and they asked for professionals in the film sector, and both Turkish and international people not to participate in the Festival or its activities.

★ Bollywood Evenings at the Summer Open-Air Theater is continuing in Istanbul's Şişli district.

The event organized in cooperation with the Indian Consulate in Istanbul with Şişli Municipality will feature movies from India.

★ The Theater Festival organized by the Municipality of Kadıköy in Istanbul's Asiatic side has started on August 2. 14 plays will be staged for the audiences without charge.

This is the 16th year of the annual festival and this year it will and on August 15. Veteran Turkish actor Genco Erkal opened the Festival with his one-man play "A Diary of the Insane".

★ The Iranian singer, composer and writer Mohsen Namjoo will have a concert in Istanbul on August 5. He was in Istanbul previously in February.

Mohsen Namjoo has left his country in recent years and settled in the U. S. The New York Times has called him Bob Dylan of Iran.

Namjoo told the Turkish daily Cumhuriyet that if people are happy then there is democracy. He says he wants a happy audience.

★ In Turkey's southwestern city of Milas archaeologist discovered seven graves at a cemetery dating back to the late Roman, Roman and Hellenistic eras.

The excavations at the site have been continuing under the direction of Dr. Abuzer Kızıl of the Muğla Sıtkı Koçman University. He is accompanied by a team of 25 scholars and students, some from abroad.

Dr. Kızıl says that the crews working on power lines by the roadside discovered the graves.

★ The 110-year-old Haydarpaşa railroad station is being restored. During the restoration works in the section under the railroad and platforms, remains of structures dating back to the Byzantine period have been found.

Now a 50-person archaeological team is conducting excavations at the site. The archaeologists are saying that the remains are from an ancient harbor city, not just only under the railroad but spread to nearly 75 acres around the railway station.

The restoration work at the historical railway station will be completed by the end of the year.
ANNOUNCEMENTS