★ Turkey saw the inflation rate rise to nearly 18 percent in August, a 15-year high, fueled by a collapse in the Turkish lira, which fell more than 20 percent over the past few weeks, reports Dorian Jones of the VOA.

The rising inflation and a falling currency are stoking fears Turkey is on the verge of financial and economic crisis.

The Turkish Central Bank, in a statement on its website, vowed to act, promising to use all tools at its disposal and reshape its monetary policy stance at a September 13 meeting where they will discuss interest rates.

However, international investors sharply criticized the central bank for failing to aggressively raise interest rates to rein in inflation and defend the currency. Turkish President Recep Tayyip Erdoğan's influence is widely seen as responsible for the failure of the bank to act. Erdoğan has repeatedly voiced opposition to raising interest rates.

★ In related news, the Financial Times of London writes that Turkish markets are braced for greater turmoil on Monday amid growing signs of corporate distress and the release of data showing runaway inflation.

Soaring prices have fuelled devaluation of the lira, triggering announcements by companies about cash flow problems and missed debt payments.

★ Two other headlines on the Turkish economy:

- According to Jason Tuvey of the Capital Economics, Turkey's economy has most likely dived into a "steep" recession after the lira's recent plunge, reports the Business Insider. Read more >> here <<

- Turkey's currency crisis has roiled emerging-markets investors far and wide, including the U.S. state of Tennessee, where the state's retirement system is the biggest institutional holder in a Turkey exchange-traded fund (ETF), reports Reuters. The Turkey exchange traded fund lost half of its value since the beginning of the year. Read more >> here << 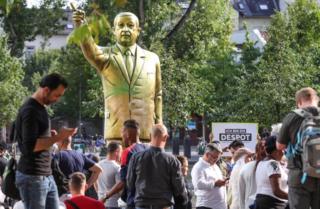 ★ The German city of Wiesbaden has removed a 13 ft. golden statue of Turkey's president after it was defaced with the words "Turkish Hitler", reports the BBC.

The statue of Recep Tayyip Erdoğan was installed in a square as part of Wiesbaden's Biennale arts festival.

Organizers said they had hoped it would spark discussions linked to this year's theme - "bad news".

The school - Liceul Orizont - is reported to be linked to the US-based Muslim cleric Fethullah Gülen, whom Turkey blames for the thwarted 2016 coup attempt against President Erdoğan.

In related news, the Israeli paper Ha'aretz claimed that Turkey has snatched over 100 alleged members of the Gülen movement from other countries in recent years. ★ German foreign affairs minister Heiko Maas made a two day visit to Turkey in the latest step in warming relations between the two countries, reports Dorian Jones of the VOA.

Political analyst Sinan Ülgen of the Istanbul-based Edam research group said: "Turkey's relationship with its other big partner in the West, the United States, is under tension. So, there is a real willingness in Turkey to improve the relations with key European countries, primarily Germany."

Until recently, Erdoğan had threatened to look east toward Moscow, in response to souring ties with Washington and Europe. But analysts point out that Turkish financial woes and the deepening crisis in Syria, underscore the limits of Turkey's relationship with Moscow. But then Turkey was conscious that Russia could never really be a strategic partner to Turkey, Ülgen added.

★ A Palau-registered dry goods ship named "Harrier" has been determined by satellite imagery to be the source of fuel oil pollution nearby Turkey's Aegean town of Foça, reports the Turkish daily Cumhuriyet.

A fisherman first noticed the fuel oil spill and afterwards notified the authorities.

The ship was brought to Turkey from Norway for dismantlement at a junkyard.

Turkish authorities fined the company owning the ship approximately $250,000 in local currency. In addition to the fine, the cleanup expenses will also be charged.

The Indian captain and the 18 crew of the ship have been summoned to the head prosecutors office in Foça. However, authorities determine that the crew has left Turkey on September 1.

Click photos to enlarge
(Will open in new window)
★ In ongoing excavations in the ruins of the ancient city of Troy, archaeologists found the skeleton of man who lived 2300 years ago during the Roman times. In contrast, Troy described in Homer's Odyssey goes back to 3100 years ago.

The team of archaeologists named the person "Last Trojan".

More photos of the excavations are >> here <<

★ The Ayvalik Film Festival begins September 5th, another film festival will also take place in Turkey's Northwestern town of Ayvalik from October 5th through the 10th, sponsored by the Kariyo and Ababay Foundation.

★ Remains of a column that is around 2,500 years old from the Persian era have been unearthed in Turkey's northern Black Sea province of Amasya during the Oluz Höyük excavations.

After finding roads, mansions and fire temple ruins during the excavations in the past 12 years, archaeologists intensified the excavation work.

After the finds excavation head Prof. Dr. Şevket Dönmez of Istanbul University School of Literature, Department of Archeology said, "This year for the first time a columnar reception hall called 'Apadana', a throne hall, a manager's hall began to emerge. We are still at the beginning of the excavations. But even the current findings are very exciting. Herodotus mentions a city called 'Kritala' in Central Anatolia. This must be Kritala, where the armies of the Persian King Xerxes I gathered."

The performance of Karahan and his troupe drew a long applause from the audience.

The festival also had special exhibits for the 25th year.

★ The Ayvalık International Music Academy, which operates in Turkey's North Western province of Balikesir's Ayvalık district, has completed the piano master class with a concert. Renowned Turkish pianist Idil Biret gave the class to nine students and the students participated in the concert.

For the past 11 years pianist İdil Biret has been giving academic training to students from all four corners of Turkey's conservatory students at the Ayvalık International Music Academy . The play tells the story of a son of a family who had emigrated to the West due to for war, returning to his hometown to bury his father.

Wajdi Mouawad, born 1968, is a Lebanese-Canadian writer, actor, and director. He is known in Canadian and French theatre for his politically engaged, moralistic theatre.

★ Mexican artist Omar Ortiz will be arriving in Istanbul for a 3-day workshop on October 10.

In the workshop the artist will be teaching the 10 basic colors used in his paintings.

Omar Ortiz was born in 1977 in Guadalajara, Jalisco, Mexico where he still lives. Since he was a boy he has been interested in drawing and illustration. He studied for a degree in Graphic Design, where he learned different techniques such as hand drawing, pastels, charcoal, water colors, acrylics and airbrushing.

His technique is called minimalist-hyper realism. His works are on display in prestigious galleries in London, the Netherlands, Greece and Taiwan.

See a video of the artist while his painting >> here <<

★ Dilara Kutay 's Paris photos, who opened her first photography exhibition in Istanbul in April, are now being exhibited under the auspices of AFSAD Ankara Photography Artists Association in the Turkish capital Ankara.

A select number of photographs that Kutay took for the book "My Paris" by Cüneyt Ayral will be in the exhibition.

The artist says "I invite you to smell the flowers of Paris".

Kutay's exhibition will be on display until October 6th.

★ Çukurova Municipality in Turkey's Mediterranean region will organize a commemoration event for the 34th anniversary of Yılmaz Güney's death, one of the legendary names of Turkish film.

Singer Melike Demirağ, filmmaker Abdurrahman Keskiner and the head of the Union of the Film Workers Mustafa Ünlü will participate in the commemoration at Orhan Kemal Cultural Center on Sunday, September 9.

★ Having brought together the successful musicians of the alternative music since 2010, the Salon IKSV opened its new season on September 8th.

In the first concert of the season, the Salon IKSV will host the group Rhye, founded in 2013 by Canadian producer and vocalist Michael Milosh.

Later in September following artist will be at the Salon: Read more at >> here <<

★ Dream Sales Machine's event Istanbul Coffee Festival will be held at Küçükçiftlik Park with the sponsorship of the Axess credit card between 20-23 September this year.

In its 5th year the festival, which will be held under the theme "The Source, The Journey, The People", will focus on the source of the coffee.


★ The Istanbul Theater Festival, organized by the Istanbul Foundation for Culture and Arts, sponsored by Koç Energy Group Companies Aygaz, Opet and Tüpraş, is preparing to meet for the 22nd time between November 17 and December 4.

The festival will host 24 theater and 52 dance and for performance troupes.

12 of the troupes are from abroad.

106 pieces of historical artifacts and one detector were seized in the search, the business owner was arrested and taken into custody.

The person taken into custody was taken to the Provincial Gendarmerie Command for questioning.

The exhibition will remain open until October 10.

Ayşe Leyla Gencer who lived between 1928 – 2008 was an internationally renowned Turkish operatic soprano.

EXCHANGE RATE for the U.S. dollar in Turkish Liras: 6.39
WEATHER

* Results for week: 4 * Standing in the league as of week ending 4
ANNOUNCEMENTS