NEWS
★ Turkey welcomed President Trump's announcement that U. S. troops will pull out of Syria. U. S. troops collaboration with the Syrian Kurdish militia has been a source of friction between Turkey and the U. S.. Turkey accuses the Syrian Kurds of being affiliated with the rebel Turkish Kurds.

According to Reuters, a Turkish minister said this week that Kurdish militants East of the Euphrates in Syria "will be buried in their ditches when the time comes".

Turkey's President Tayyip Erdoğan said this week that Turkey may start a new military operation in Syria at any moment, touting support from Trump even though the Pentagon had issued a stern warning to Turkey.

AP reports that addressing a business meeting in Istanbul Friday, Erdoğan said Turkey would work on plans to conduct operations to eliminate both IS and Syrian Kurdish militants from the region. The two leaders' meeting had been arranged before Trump's announcement about the U.S. pull-out, a move already welcomed on Thursday by Russian President Vladimir Putin.

Turkey has repeatedly called for Syrian President Bashar al-Assad's ouster and supported Syrian opposition fighters. Tehran and Moscow meanwhile are Assad's strongest allies and have helped to turn the war in Assad's favor.

Turkey, despite its differences with Iran and Russia over Syria, has worked closely with both countries to find a political solution to the war through the Astana process launched last year. 
★ Speaking of Syria, Newsweek published an article saying that Syrian war refugees have "no place anymore" as Turkey pushes them to return home.

There are currently more than 3.5 million registered Syrian refugees in Turkey. With the unregistered ones the number is above 4 million. Just in Istanbul alone there are 550,000 refugees.

At the beginning of the Civil War in Syria, Turkey had an open door policy the article says. Now, instead of an "open door," Turkish soldiers patrolling the roughly 475-mile wall on the border with Syria shoot on sight.

The government is dismantling refugee camps and shutting down nongovernmental aid organizations and medical clinics.

"We aim to make all Syrian lands safe, "Erdoğan said as he campaigned for re-election in June, "and to facilitate the return home of all our guests."

★ Writing for the VOA, Ezel Sahinkaya reports that while the European Court of Human Rights has demanded the release of Selahattin Demirtaş, a former co-chair of the pro-Kurdish Peoples' Democratic Party, Turkish courts convicted him of spreading terrorist propaganda, which some analysts and rights groups view as Turkey attempting to misuse the country's counterterrorism laws to crack down on political dissidents.

"It is quite obvious that anti-terrorism laws and laws prohibiting propaganda for terrorism are just used in a very blunt way as a political instrument to suppress political opinion which the government finds inconvenient," Andrew Gardner, a Turkey expert at Amnesty International, told VOA.

★ The leader of the Eastern Orthodox churches based in Istanbul is suing Princeton University, seeking the return of four historic manuscripts allegedly stolen from a Greek monastery during World War I.

Princeton officials say that there is no evidence to indicate that the manuscripts were looted.
★ A U.S. servicemember, detained this week by Turkish officials over accusations he has links to a U.S.-based Turkish cleric Fethullah Gülen considered an enemy by Turkey, has been released, reports the Stars and Stripes.

The American was identified as Yahya Özer, who is listed in U.S. military records as an Army specialist assigned to Combined Joint Special Operations Task Force–Syria.

The soldier also has family ties in southern Turkey.

Fethullah Gülen and his followers are accused of orchestrating the 2016 coup attempt in Turkey.
★ Speaking of Fethullah Gülen, according to Reuters, U.S. President Donald Trump told his Turkish counterpart Tayyip Erdoğan that Washington "would take a look at" the possibility of extraditing cleric Gülen, the White House said on Tuesday.

"The only thing he said is that we would take a look at it," White House spokeswoman Sarah Sanders told reporters. "Nothing further at this point beyond that ... nothing committal at all in that process."

Turkey's foreign affairs minister said on Sunday that Trump told Erdoğan that Washington was working on extraditing the cleric. Gülen, a former Erdoğan ally has been living in self-imposed U.S. exile for nearly two decades.

In related news, Bijan Rafiekian, the ex-business partner of former U.S. national security adviser Michael Flynn, pleaded not guilty on Tuesday to charges he covertly lobbied for Turkey to discredit and extradite Gülen.

Along with Rafiekian, Ekim Alptekin, worked with Turkish government officials on a secret plan to return cleric Fethullah Gülen.

In exchange Turkey paid hundreds of thousands of dollars to the two.

Alptekin is believed to be in Turkey and was not expected to appear in court.
★ The Maritime Executive website reports that on Wednesday morning, the Comoros-flagged freighter Natalia ran aground on Turkey's Black Sea coast, driven ashore by heavy weather.

The master declined assistance from response vessels, according to Anatolia News Agency. The Natalia succeeded briefly in regaining propulsion, but at 09:00 hours, she ran aground on a peninsula.

The vessel's 16 crewmembers were evacuated to shore using a line and pulley system. No pollution, flooding, or injuries have been reported.

The 1983-built Natalia (IMO 8203622) is a geared freighter flagged in the Comoros Islands. Over the course of 2018, PSC inspectors in Turkey, Russia and Greece have recorded more than 100 alleged deficiencies on board the Natalia. 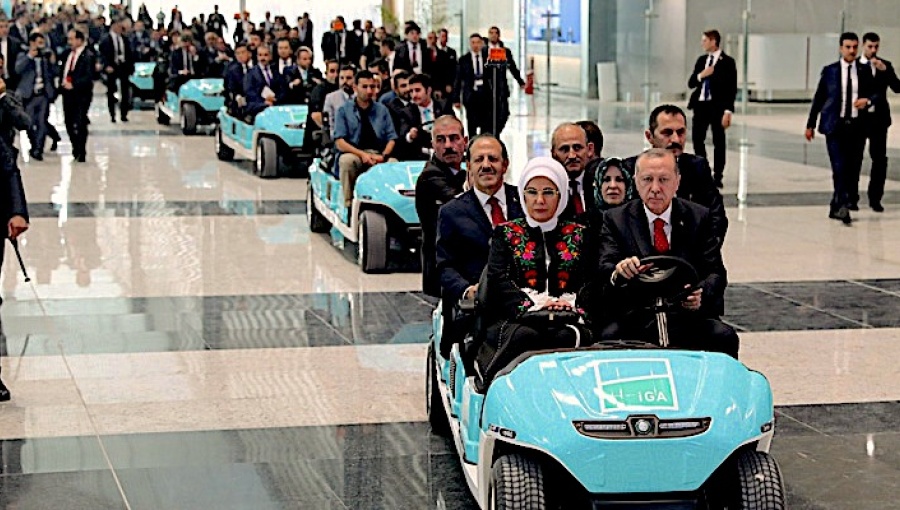 President Erdoğan at the wheel leading a buggy convoy at the late October inauguration of Istanbul Airport.
★ The building site of Istanbul's massive new airport has been inundated after heavy rains, Turkish news site OdaTV reported on Wednesday. Read more at >> here <<

A transfer of Istanbul's Ataturk airport operations to its new international facility has been delayed and will now happen "gradually" from January, the Turkish transport ministry said on Friday, December 21.

Turkish news agency DHA had reported on Tuesday that the large move would happen in March 2019. 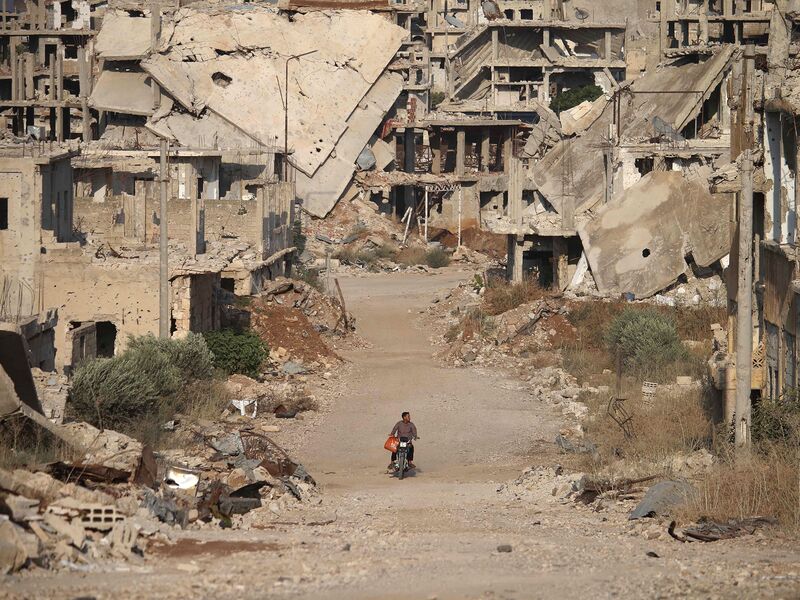 A war-torn city in Syria
★ Turkish cement maker Mardin Cimento, located in the province of Mardin along the border with Syria, surged in Istanbul trading on Thursday after U.S. President Donald Trump announced his decision to withdraw U.S. forces from Syria, reports Bloomberg news.

Specifically, AirTies' Smart Wi-Fi software will be pre-integrated into Broadcom's Wi-Fi 6 drivers, making it easier for operators to bring AirTies' solutions to third-party gateways. In addition, AirTies will use Broadcom's Wi-Fi 6 chipsets in a new class of Mesh extenders to be offered in 2019.

★ Turkish singer Ajda Pekkan is rumored to be signing a 20-year-old contract with a Turkish music company. Pekkan is 72 years old. In the contract Pekkan is promising to produce three albums.

Pekkan has the nicknames "Superstar" and "Diva". She has been active in music since 1960. Her last was published in 2017.

★ Cüneyt Kosal passed away at the age of 87. He was a renowned musician, kanun player and a composer of traditional Turkish music.

★ Argentinian tango singer Ariel Ardit was in Istanbul this week for a concert. He was accompanied by Andres Linetzky on the piano, Manuel Quiroga with a violin, Pablo Guzman with the base and Ramiro Boero with the bandoneon.

Ardit said that they were bringing a new interpretation to the traditional tango pieces.

Bursa is a province in northwestern Turkey, south of Istanbul across the Marmara Sea.

Information on French sisters Katia and Marielle is  >> here <<

A performance by the sisters is >> here <<

★ American violinist Sarah Chang will be in Turkey for a performance on February 9. Chang, a child prodigy, had her first concert at the age of eight in the accompaniment of the New York Philharmonic. She is now38 years old.

Film
★ The Istanbul Culture and Arts Foundation will be ending its "Galas" film screenings with the Turkish movie Sibel.

The movie has returned to Turkey in the 2017-2018 season from both international and domestic festivals with many awards.

The film was a collaboration between France, Germany, Luxembourg and Turkey. It tells the story of 25-year-old Sibel living with her father and sister in a secluded village in the mountains of Turkey's Black Sea region.

Sibel is a mute, but she communicates by using the ancestral whistle language of the area. Rejected by her fellow villagers, she relentlessly hunts down a wolf that is said to be prowling in the neighboring forest, sparking off fears and fantasies among the village women.

There she crosses path with a fugitive. Injured, threatening and vulnerable, he is the first one to take a fresh look at her.

The videos were titled "At Nighttime" and "Staging Silence 2".

The exhibition description is >> here <<

Photo of the Sleeping Girl is >> here <<

★ A new documentary on the life of Sait Maden has been screened at the International Typography Activity at Istanbul's SALT auditorium.

Sait Maden was a Turkish translator, poet, painter and graphic designer. He lived between 1931 and 2013.

The documentary will be shown throughout different provinces of Turkey in 2019.

See introductions to the documentary >> here <<

★ BASE is a platform that brings new artists together and promotes their art. Based in Istanbul, the organization regularly has exhibitions.

This year with the graduation of new artists from art schools around Turkey, BASE added many new generation artists to its ranks.

With the 105 selected works of 94 new artists, BASE has organized a new exhibition that will take place over four days. In addition to the exhibition there are 30 panel discussions that will host 70 renowned names in arts. There will also be teach-ins and workshops.

★ pptArt is an Italian-based crowdsourcing platform offering bespoke art-related services to corporations and individuals. It brings together over 1000 artists from many countries.

Every year pptArt organizes an "Corporate Art Awards". This year the pptArt gave this award to Turkey's Borusan Contemporary.

Borusan Contemporary was singled out for its multiplatform program activities in the field of museum, exhibitions, events, educational activities, orders for new art and site-specific installations.

Borusan Contemporary is established by Borusan Holding, which is a Turkish industrial group headquartered in Istanbul, Turkey. Its activities include steel manufacturing, car distribution, energy generation and logistics. The company was founded by Asım Kocabıyık in 1944 to trade iron and steel. Today, Borusan operates in 11 countries over three continents

★ The Sakıp Sabancı Museum is having an exhibition titled "Thinking of the Future with the Russian Avant-Garde Art and Design". Along with the exhibition there were a series of lectures.

EXCHANGE RATE for the U.S. dollar in Turkish Liras: 5.32
WEATHER

* Results for week: 16 * In games played so far this weekend: * Standing in the league as of week ending 16
★ Basketball