NEWS
★ The RAND Corporation, a nonprofit policy think tank based in Santa Monica, California, has a new report out titled "Turkey's Nationalist Course: Implications for the U.S.-Turkish Strategic Partnership and the U.S. Army."

The preamble to the report says the following:

"For more than six decades, the United States has maintained a strategic partnership with the Republic of Turkey as a key element of U.S. strategy in Eurasia and the Middle East. This partnership was forged at the outset of the Cold War to check Soviet expansionism, and Turkey remains a powerful North Atlantic Treaty Organization ally at the nexus of three regions important to U.S. security.

"The United States and Turkey have long cooperated on a range of global issues, including countering terrorism and violent extremism, enhancing energy security, and promoting prosperity and development. However, the partnership has become strained in recent years because U.S. and Turkish interests and assessments of various challenges are not as aligned as they once were, and significant disagreements have emerged on policies to address many of these challenges. Tensions in Turkey's relations with Europe and other neighbors have exacerbated these strains."

Some of recommendations of the report are as follows:

- The United States needs a long-term strategy to buffer relations with Turkey against the kind of disruptive developments experienced in recent years. It also needs initiatives that could maintain cooperation on abiding shared interests over the next decade and help restore a reliable strategic partnership if a democratic opposition emerges to restore Turkey's role as a more cooperative ally and reliable regional and global partner.

- Further efforts should be taken to deepen dialogues between U.S. military and Turkish General Staff leaders and to revitalize the U.S.-Turkish High-Level Defense Group, taking into account the increased importance of the Turkish minister of defense. In Turkey's cultural and commercial hub Istanbul, she met with Turkish journalists and NGOs on freedoms.

She also brought up with the Turkish authorities the case of the German journalists who were not unable to get press cards for covering Turkey.

She also discussed the German citizens that are incarcerated in Turkey. There are approximately 60 of them.

Chancellor and her staff expressed to Turkish authorities that the rule of law is very weak in Turkey, and asked for judicial reforms and ensure the independence of the judiciary.

Germany and Turkey have rarely seen eye-to-eye lately, but instability in the Middle East and North Africa is a growing concern for both countries. Keeping dialog channels open, as well as cooperation is crucial to tackling growing conflicts in the region, Deutsche Welle wrote in an article.

For the German government, one of the major concerns is the possibility of a new wave of refugees. This continues to make Turkey an important actor in the region, which Merkel has to come to terms with, Deutsche Welle added.

During her visit, Chancellor Merkel also opened the campus of the Turkish-German University in Istanbul with President Erdoğan.

In related news, Turkish foreign affairs minister Mr. Mevlüt Çavuşoğlu on Wednesday accused the European Union of failing to honor a refugee deal, strongly criticizing the bloc for failing to pay Turkey the amount it promised.

Çavuşoğlu told the German Bild newspaper that the European Union had promised to pay Turkey $3.33 billion in both 2016 and 2018.

"Now it is 2020 and we still have not received the first $3.3 billion in its entirety," Çavuşoğlu said.

★ According to the Greek daily Kathimerini, Turkey has blocked a request from the Republic of Cyprus to take part in the global Conference on Disarmament in Geneva, as an adversarial relationship between the two countries is growing more intense.

The Geneva Disarmament Conference is a multilateral disarmament forum that meets three times a year in Switzerland. The global forum negotiates arms control and disarmament accords and focuses on the cessation of the nuclear arms race.

The block came two days after Cyprus called Turkey a "pirate state" over its attempts to drill for oil and gas off Cypriot waters, and three days after the European Union had issued a warning to Turkey.

★ According to the Turkish daily Birgün, after delaying the renewal of the press cards for their journalists, Turkey's Communication Directorate of the Presidency canceled all the cards.

The journalist working for Evrensel also met the same fate.

The two dailies are fierce opponents of the Justice and Development Party rule.

★ A powerful earthquake shook Turkey's Eastern provinces on Friday. As of today, the death toll stands at 29 with over 1000 injured. The magnitude of the earthquake was 6.8.

Turkey, much like California, has crisscrossing earthquake faultlines that have caused major earthquakes every decade.

★ According to the Turkish daily Cumhuriyet, the Turkish government will be giving $500 million of taxpayers money to the operators of the third Bosporus Bridge.

The bridge is the newest on the strait and a Turkish-Italian consortium built it in 2016. The Turkish government guaranteed to make up the difference if less than 135,000 vehicles a day paid tolls.

★ According to the Anatolia News Agency, Turkey's industry and technology minister Mr. Mustafa Varank announced that Turkey will "increase close relationships with Iran for the benefit of the two nations and the stability in the region." Iranian vice president Sorena Sattari was in Turkey on Tuesday.

On Wednesday Sattari and representatives of 80 Iranian companies held a meeting in Istanbul with their Turkish counterparts.

All these come after the U.S. imposed more sanctions on Iran. ★ According to the Turkish paper Evrensel, the villagers from the hometown of Turkish President Recep Tayyip Erdoğan in the Black Sea province of Rize are protesting the construction of a hydroelectric power plant.

The villagers are upset that the power plant will be blocking the river that goes through their village. They have also taken the company undertaking the construction to court.

The construction company, when it appeared at the village some months ago, claimed that they were building a road and hid the fact that it was a hydroelectric power plant.

In 2010, a court in the province stopped other hydroelectric projects by the construction company, despite these rulings, the villagers say the company keeps building them. ★ Evermore pesticides, many illegal, are being used in Turkey, according to a new Greenpeace study. Yet the tainted produce keeps ending up on European dinner tables, setting off alarm bells about serious health risks, reports the Deutsche Welle.

The researchers who compiled the report studied 30 different types of tomatoes, green peppers and cucumbers, taking 10 samples of each from supermarkets and weekly farmer's markets in August, September and November 2019. Scientists studied the vegetables, looking for traces of pesticides to determine their effect on consumers, crops, and nature.

Turkey exported roughly 4 million tons of fruits and vegetables in 2019.
ARTS AND CULTURE

In his exhibition, Onan reinterprets the typology of flâneur, the modern time traveler.

Onan looks for the traces of the flâneur in the 21st century the conception that first explored in the writings of Charles Baudelaire in the nineteenth century to identify an observer of modern urban life.

Flâneur often derives his power from his mobility, moving towards his everlasting search for the unknown. Onan's photos walk us around the cities of Paris, Prague, Luxembourg, Zagreb, Belgrade, and Dubrovnik. Time and places change, but being on the road remains unchanged.

See other photographs of the photographer >> here << 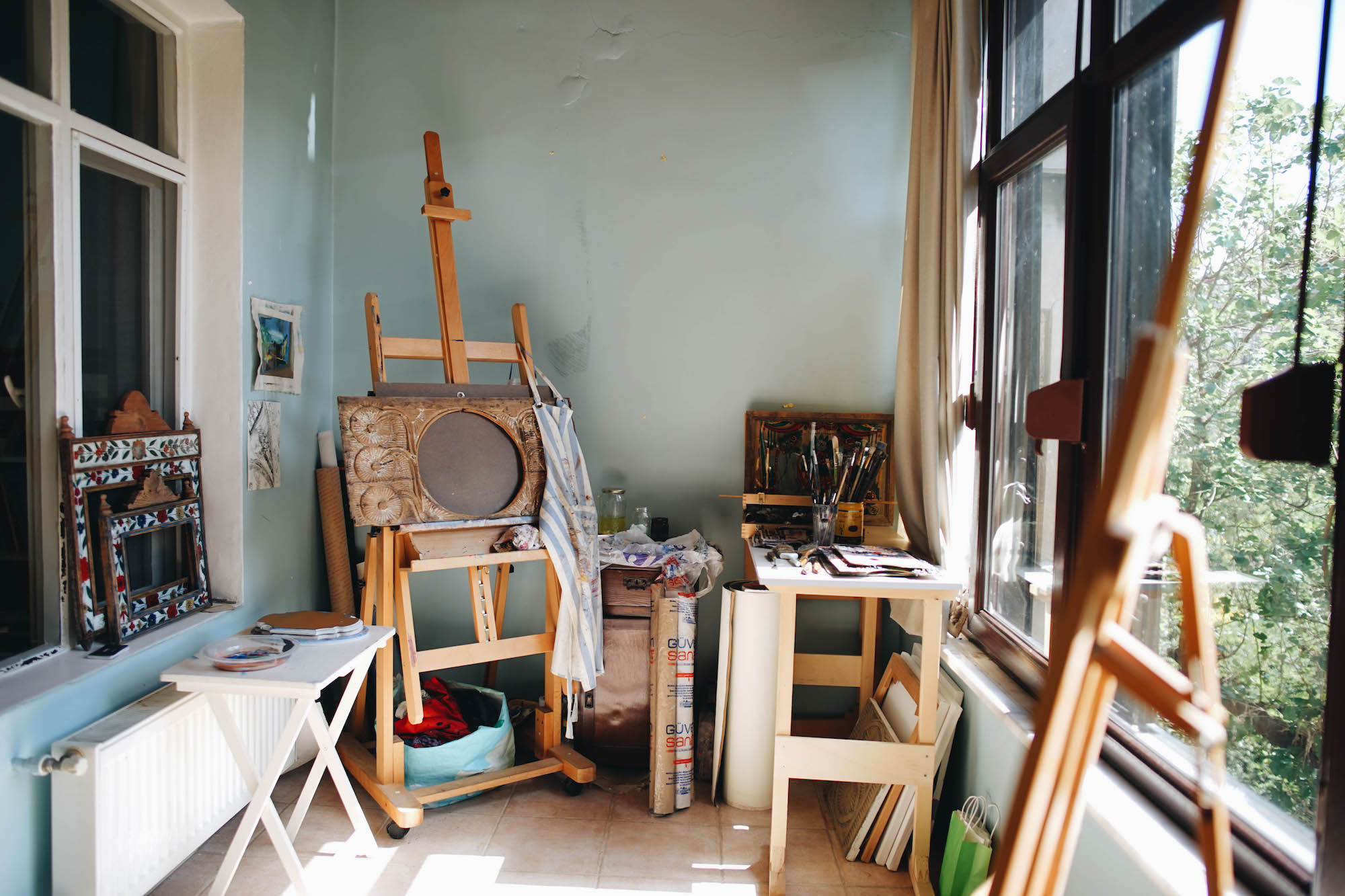 ★ NADAS Istanbul has announced its upcoming art residency program, Nadas'a Bırak, taking place 10 – 16 May 2020. This week-long residency offers space to seven artists or creative individuals who seek to develop their work in a peaceful atmosphere among a sustainably-minded community. The program consists of five intensive studio days concluding with an open studio event on 16 May.

The deadline for applications is February 22.

NADAS is a creative house in Kadıköy, Istanbul that offers space for individual and community projects that care for the diversity of urban life and people's connection to their environments. Throughout the year NADAS hosts workshops, art and yoga classes, talks and community meet-ups around topics of sustainability.

NADAS inhabits a beautiful 1930's house in the historic neighborhood of Yeldeğirmeni.

Survey excavations that have been carried out in a field for the construction of a stadium have unearthed 2,000-year-old burials. The area in the province of Denizli was declared a first-degree excavations area, while another place will be searched for the stadium, the Denizli Metropolitan Municipality announced.

During the exploratory excavations, a rectangular family burial chamber was uncovered. A travertine sarcophagus and tombs were found in the burial chamber.

★ Turkey's Zeugma Mosaic Museum had a record number of visitors last year. Among the exquisite mosaics dating back to 2000 years, is the world-renowned Gypsy Girl Mosaic.

In addition to the Gypsy Girl mosaic, the museum is one of the largest of its kind and is home to unique ancient artifacts, such as mosaics, Roman-era fountains, the bronze sculpture of Mars -- the god of war in Roman mythology.
EXCHANGE RATE

EXCHANGE RATE for the U.S. dollar in Turkish Liras: 5.94
WEATHER

* Results for week: 18 * In games played so far this weekend: * Standing in the league as of week ending 18 ★ Other sports:

Kaya was competing in the Youth Men Classical Archery Category. He is only 14 years old.

★ Sait Uygur of Turkey recently became the European champion in Muay Thai, sometimes known as Thai Boxing. He is now eyeing to become the world champion in the competitions that will be held in Kazakhstan in May.

One thing that distinguishes Uygur from others is that he is 52 years old and a father of five children.

★ In Tel Aviv Grand Prix 2020 Judo Competitions taking place in Israel 545 men and women from 83 countries are competing. Turkey has sent 10 men and five women judokas to the competitions.

So far in the competitions, the following Turkish judokas received medals:

★ 12-year-old tennis player Esila Toklu will be representing Turkey in the U 12 European winter cup in Ukraine at the end of January.


will be on the stage on Feb 8th
in
San Francisco's Rickshaw Stop at 9 P.M.

We are giving away tickets for the event, send an email to TRH@turkradio.us with your name and your cell phone number.