AAhmet Toprak is the editor-in-chief. Your broadcast host is Fuad Tokad. 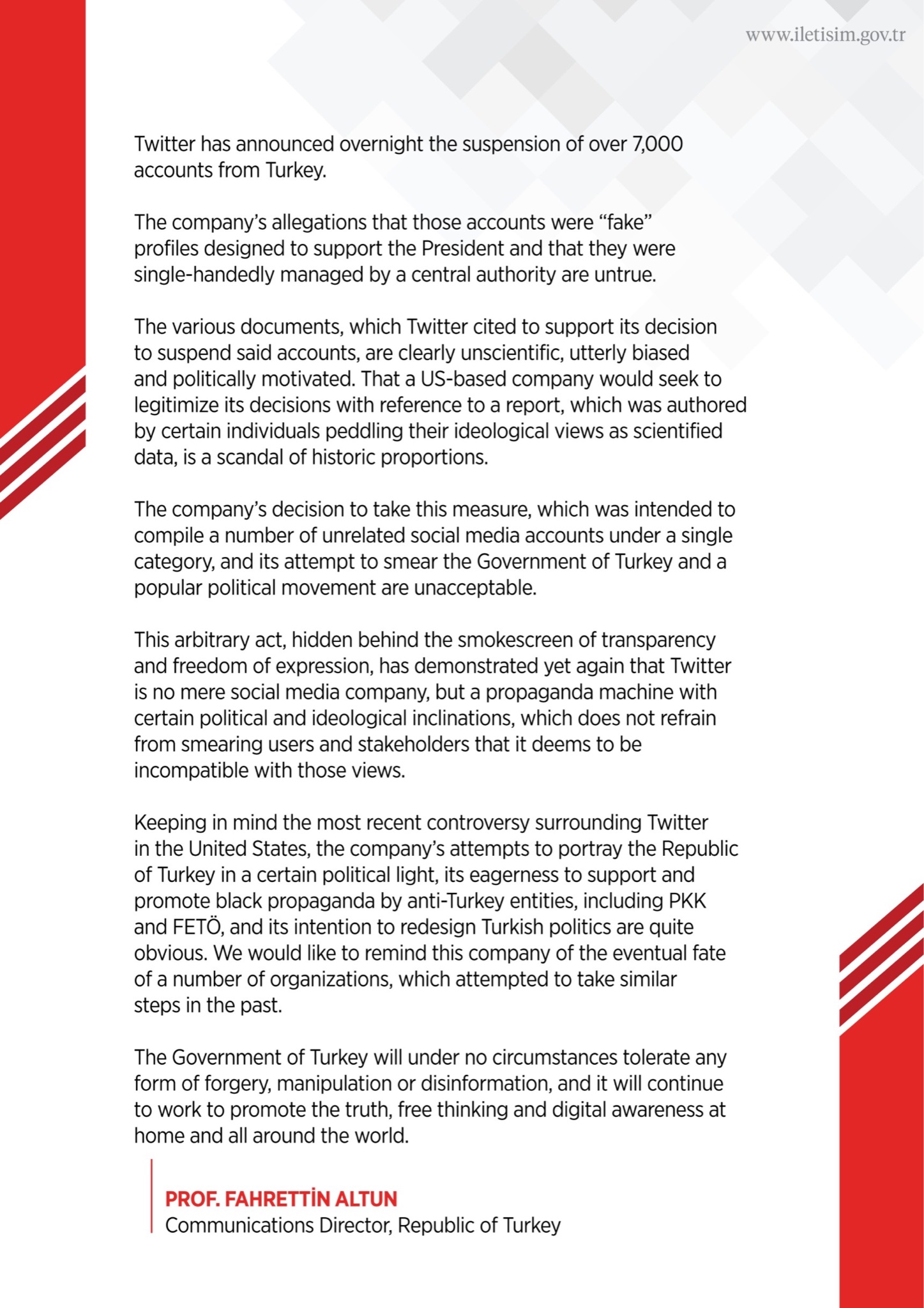 ★ Twitter removed over 7000 accounts from Turkey this week, claiming that they were "employing coordinated inauthentic activity," and promoting narratives favorable to Turkish President Tayyip Erdoğan and the Justice and Development Party.

In its Friday blog post, Twitter revealed it had shared data from the account takedowns related to Turkey, as well as China and Russia, with the Australian Strategic Policy Institute and Stanford Internet Observatory.

In what the Stanford Internet Observatory dubbed "The Turkey Operation," it found batches of fabricated personalities, all created on the same day.

The suspended accounts were used for Justice and Development Party "cheerleading," to increase domestic support for Turkish intervention in Syria and compromised other Twitter accounts linked to organizations critical of the government, the Stanford Internet Observatory found.

Turkish politician Tuna Bekleviç wrote that one of the accounts closed had sent death threats to him in the past two years for criticizing Turkey's President Erdoğan.

The ruling Justice and Development Party administration had banned Wikipedia and YouTube in the past.

★ David Gardner wrote in the Financial Times on June 11 that there are several reasons Turkey's president Mr. Recep Tayyip Erdoğan looks vulnerable since he is meeting frustrating setbacks both at home and abroad.

He cites these as:

- Mr. Erdoğan depends on Russia's acquiescence in Turkey's retention of two enclaves it seized in north-west Syria in 2016 and 2018, as well as for the buffer zone it is trying to create across north-eastern Syria following the US withdrawal in 2019.

- Mr. Erdoğan's intervention in Libya is bringing him up against another alliance of antagonists: Greece, Cyprus and Israel.

- Turkey's drilling offshore from Cyprus for gas and oil has brought about European Union threats of sanctions.

- Mr. Erdoğan cannot rely on support from the U.S. since it also faces sanctions for buying Russian missiles as a member of NATO, as well as breaking the embargo on Iran.

- Although Turkey is trying to diversify its energy dependence, it still gets roughly half of its gas imports from Russia.

- Turkey's currency is sliding and a currency crisis is looming.

- Many of the signals Mr. Erdoğan is emitting at home do not suggest strength, despite his confident display of hard power abroad.

"President Erdoğan announced a $15 billion aid package to help redundant [laid-off] workers but the money has been slow to arrive. This has left a void not just in the pockets but in the loyalties of voters such as Ms Ferman, once a diehard supporter of Mr. Erdoğan, which the opposition has been quick to fill. While most Turks agree that the government handled the health aspects of the pandemic well, the economic fallout may yet turn people against the once unshakeable Mr. Erdoğan."

"We couldn't get our salaries from the company. None. Even if we got a part of it, we could manage to go on, but we couldn't get anything. For three months, zero income," Ms. Ferman told The Times. "Of course, the state might not have the money. But if they can't provide, they shouldn't talk big. Thousands of people died, and the poor were ignored."

It was the opposition Republican People's Party that threw her a lifeline. As she waited for the state's promised help to come, Ms Ferman's sister suggested she add her bills to a scheme started by Istanbul's Republican People's Party-run city council. The council runs a financial scheme that allows companies and individuals to donate money that is used to help the needy. The practice, called askida fatura, has become popular in Turkish bakeries over the past decade, where wealthier shoppers buy themselves bread and pay for another loaf to be given to someone who cannot afford food. The council scheme allows anyone to cover the bills of someone who is struggling.

To Mr. Erdoğan, though, such programmes represent a political affront, and a threat to his 17-year dominance of Turkish politics. Since losing Istanbul, Ankara, and a series of other major cities to the Republican People's Party in last year's local elections, he has been denied one of the crucial means by which his party secures votes – welfare handouts to the urban poor. While central government is responsible for unemployment and pension payments, city councils offer countless opportunities to court support through targeted welfare and development schemes in impoverished areas.

Polls show that Mr. Erdoğan is still by far the most popular political figure in Turkey, but that his support has shrunk back to the crucial midway line. In parliament, the Justice and Development Party can now only form a government in coalition with the Nationalist Action Party, and even combined, their support is in danger of dipping below 50 per cent. At these narrow margins, a swing of a few percentage points could spell disaster for Mr. Erdoğan. In the post-Covid era, that swing may come from voters like Ms. Ferman.

★ Reporting from Istanbul The Guardian's Bethan McKernan wrote that the Turkish parliament is considering a bill that would greatly expand the powers of a 28,000-strong network of nightwatchmen across the country, a move viewed by critics as an attempt to create an auxiliary police force loyal to the president, Recep Tayyip Erdoğan.

The draft law will allow the nightwatchmen to carry out identification checks and body searches and would authorize the use of lethal force.

Neighborhood nightwatchmen armed with whistles and batons used to be a common presence in Turkey, often affectionately referred to as "uncles" looking out for burglars and petty criminals. The system was abolished in 2008 but revived in 2016 after the failed coup against Erdoğan's government.

The current generation of night-time community officers are mostly younger men with links to the youth wing of the ruling Justice and Development party. They are supposed to serve as backup for police officers dealing with criminals and protesters.

★ According to the Associated Press, a Turkish court on Thursday convicted Metin Topuz, a local U.S. Consulate employee in Istanbul, of aiding an armed terror organization him to eight years and nine months in prison, the state-run Anadolu news agency reported.

Prosecutors charged Topuz with helping cleric Fethullah Gülen who lives in the U.S. and is being accused by the Turkish government for a 2060 coup attempt.

Secretary of State Mike Pompeo issued a statement criticizing the conviction. Pompeo said "U.S. officials observed every hearing in the trial of Mr. Topuz in Istanbul, and we have seen no credible evidence to support this decision. As a result, this conviction undermines confidence in Turkey's institutions and the critical trust at the foundation of Turkish-American relations."


★ Speaking of Fethullah Gülen, according to Deutsche Welle, Turkish authorities have issued arrest warrants for 149 people, including current and former soldiers and police, wanted over the 2016 failed coup. Raids have reportedly taken place in 16 provinces.

Since the coup bid in July 2016, when 250 people were killed, President Recep Tayyip Erdoğan has blamed his former ally Gülen for the bid made by a military faction.

★ According to Bianet, Turkey saw a new surge in infections after liberalizing the lockdown against coronavirus.

Turkey's Ministry of health as reported almost 1500 new cases, the highest for nearly a month after lifting a number of measures since June 1.

Now the cafés and parks are open and the curfew for youth and elderly are eased and intercity travel restrictions are removed.

Earlier in the month, the Turkish Medical Association Central Council released a statement and said that the pandemic is still continuing, and expressed their concern about the so-called normalization process.

★ According to Bianet, Turkey may have difficulties accessing some agricultural products in case of the continuation of the coronavirus pandemic, Greenpeace Mediterranean has warned.

Lengthening of lockdowns and travel bans would cause disruptions in supply chains and production and an increase in food prices, which may lead to a severe food crisis for at least 34 countries, including some of Turkey's neighbors, the group said in a new report titled "Turkey's Food Security in the context of the Pandemic."

★ According to Bloomberg's Çağan Koç, Turkey's current account deficit increased to $5.06 billion in April worse than expected. It is also the biggest since January 2013

In related news, Turkish statistical Institute reported that Turkish exports fell by 41.4% annually in April and imports by 25%.

★ One of the things that could make Turkish current-account deficit worse is a drop in the tourism revenue. Before the pandemic Turkey received about 50 million tourists in 2019. This year the future looks very bleak.

Issuing a travel warning, Germany announced this week that it will not support Germans traveling to Turkey. Germans made up about 10% of the tourists, second in place after Russia.

According to the Anatolia News Agency, Turkish officials are discussing with their German counterparts to have the German warning rescinded.

Germany's foreign affairs minister Heiko Maas said on Thursday that the topics in the discussions included capacity of the Turkish health system and measures for safety of tourists.
EXCHANGE RATE

EXCHANGE RATE for the U.S. dollar in Turkish Liras: 6.82
WEATHER


*** Turkish Folk Dancing with TUFOD in the South Bay