★ As we told you last week, former National Security Adviser John Bolton's recent book has many references to the relationship between President Trump and Turkish President Recep Tayyip Erdoğan.

This week, criticizing the book for being "one-sided," Turkeys Presidential Communications Director Fahrettin Altun has said Trump and Erdoğan put great effort into repairing the relationship between Turkey and the U.S., reports the Anatolia News Agency.

In a series of tweets, Mr. Altun said that the book included "misleading accounts of conversations" between the presidents of the two countries.

In his book, Bolton made several allegations regarding the relationship between President Recep Tayyip Erdoğan and his U.S. counterpart Donald Trump, including the latter's intervention in a lawsuit against Turkey's state-owned Halkbank in the U.S.

Trump tends to "give personal favors to dictators he liked," Bolton says in the book, referring to Erdoğan and China's President Xi Jinping.

"We find it reprehensible that former high-level officials attempt to use serious diplomatic conversations and efforts to resolve outstanding issues between allies like the U.S. and Turkey for their domestic political agendas," said Fahrettin Altun, alluding to Bolton.

"We Are confident that the U.S.-Turkey relationship will survive such efforts and even thrive in the end. President Erdoğan will continue his frank, honest and straightforward conversations with U.S. President Donald Trump," he said.

★ In a public opinion survey conducted by the Kadir Has University of Istanbul among 1,000 people from 26 provinces of Turkey, people said that the U.S. and Israel are the biggest threats. However, the percentage of people considering the U.S. as a threat dropped from 81% to 70% this year.

34% of the respondents said that U.S. support for the Syrian Kurds was a major issue between the two countries, while 27% sad that the Middle East policies Of u.s. was the issue

Those who said Turkey should cooperate with the U.S. in foreign policy increased from 8.4 percent to 27.7 percent.

★ French President Emmanuel Macron says he "won't tolerate" the role that Turkey is playing in Libya, calling it an obstacle to peace, reports the Voice of America.

Turkey has been supplying arms to the U.N.-backed government in Tripoli, which is fighting a rival administration headed by General Khalifa Haftar.

At a news conference in Paris Monday with Tunisian President Kais Saied, Macron accused Turkey of ignoring a U.N. arms embargo against Libya and calls by the European Union for an end to all foreign intervention in Libya.

As we reported to you last week, France accused Turkey of harassing one of its naval vessels in the Mediterranean, which they claimed was on patrol to intercept arms shipments to Libya as part of an embargo.

★ The trial of six Turkish journalists from three different outlets over a news report on the funeral of a National Intelligence Organization officer who was killed in Libya started June 24 at İstanbul 34th Heavy Penal Court. The journalists have been in pre-trial detention for months.

When photographs of the funerals appeared on social media, the journalists reported on the appearance of photographs which then led to their arrests and prosecutors charged them with espionage.

After the journalists' defense statements, their attorneys requested their release while the prosecutor demanded the continuation of arrests.

The court ordered the release of three on the condition of judicial control while the others will continue to stay behind bars.

The next hearing will be held on September 9. ★ The Constitutional Court has rejected an application for the cancellation of Peoples' Democratic Party deputies' dismissal.

Leyla Güven and Musa Farisoğulları, along with main opposition Republican People's Party MP Enis Berberoğlu, were stripped of MP status on June 4. The Peoples' Democratic Party applied to the top court against its MPs' dismissal on June 10. Examining the application, the court concluded that it wasn't authorized to make a decision and rejected the application in a unanimous vote. The justified decision is expected to be released in the following days.

In May 2016 Enis Berberoğlu's immunity as a member of the parliament was lifted to allow for judiciary prosecution and on 14 June 2017, he was condemned by an Istanbul tribunal to 25 years prison for having divulged in 2014 pictures of the Turkish secret service which seemed to show delivery of weapons to Syrian rebels, in open contradiction to the Turkish government's denial of being actively involved in the Syrian conflict.

On 24 June 2018, he was re-elected as a member of the Parliament and released from prison on 20 September 2018. His Parliamentary Membership was revoked on 4 June 2020

The Peoples Democratic party deputies were convicted of being members of an armed terrorist organization, meaning, members of the underground Kurdistan Workers Party.

★ According to the news site T 24, Derya Sert, a 32-year-old woman from Turkey's Antalya province, gave birth to a boy on June 4. What makes the birth remarkable is that Derya Sert received an uterus transplant in August 2011. ★ Turkey's rare and endangered Anatolia Lycian salamander is under threat from serious habitat loss caused by various factors, including the opening of the new stone and marble quarries, according to an expert, reports Bianet.

Thanks to climatic and geographical conditions, the fauna of Turkey is abundant and extremely varied and includes many rare and endemic species.

But in Turkey, as in other parts of the world, such species struggle to survive under various threats such as climate change, habitat loss, and human-wildlife conflict.

Mert Karış, an expert on herpetology, the branch of zoology concerned with reptiles and amphibians, said the first member of the species was detected by Austrian herpetologist Josef Eiselt in 1966 in Gedeller village, Konyaaltı district in the city of Antalya, although the species was not known by its Latin name Lyciasalamandra antalyana at the time. Emin Yoğurtçuoğlu told Anadolu Agency that he came across a jungle cat in a location that he would not share to protect it from poachers and illegal hunters.

Yoğurtçuoğlu said he had also observed wildcat and lynx among the five endangered cat species in Turkey, adding he wants to record caracal and Anatolian leopard as well.

This year due to the pandemic this income will be significantly lower.

Turkey has been pushing for the European countries, especially Germany, to lift their restrictions on travel to Turkey. In the past, Germans have been one of the top travelers to Turkey. According to the German daily Der Spiegel is electing to lift the travel restrictions due to Turkey's controversial COVID-19 treatment.

Deviating from the World Health Organization's recommendations on treatment, Turkish physicians have been using the antimalarial drug hydroxychloroquine. In recent studies, the drug was found not to be effective against coronavirus infections. With its potential to harm the patient, the World Health Organization and others have recommended that the drug not be used for COVID-19 treatment.

★ According to the Turkish news site Diken, Greenpeace Mediterranean analysis on the Eurostat data indicates that Turkey is receiving 173 times more plastic waste from Europe as compared to 15 years ago.

Every day over 210 trucks unload the European plastic waste to Turkish sites. The amount of waste delivered to Turkey increased significantly after China band importation of waste to their country in 2018.

In related news, an investigation by BBC News has found that some plastic waste from Britain sent to Turkey for recycling is instead being dumped and burned on the side of roads.

ARTS AND CULTURE
★ With the liberalization of shelter at home and self isolation policies, arts and culture scene is also showing signs of new activity.

Here is a summary: ★ Istanbul Modern has reopened its temporary home in Istanbul's Beyoglu district. At its venue, Istanbul modern is offering its collection exhibition for viewing.

Istanbul modern also invited 43 artists from different generations to share the work they produce during the pandemic with audiences everywhere via the museum's online platforms. The virtual exhibition will be available through November 15.

Istanbul Modern's International Artist Residency Program, launched in October 2018 with the support of the Istanbul Development Agency (ISTKA), brings together ten artists from different regions of the world to collaborate with local craftspeople in Istanbul.

The resulting work of the 10 artists are on exhibition through October 18.

Istanbul modern is also presenting a virtual exhibition on its Artists' Film International, a program featuring videos, animations, and short films by artists from around the world.

Established by Whitechapel Gallery in London in 2008, Artists' Film International is a partnership of 20 international organizations committed to sharing their research on moving image.

Photographer Lütfi Özkök's selected portrays are also still on view. Özkök who lived between 1923-2017, was internationally renowned for his portraits of authors and artists. ★ Arter, an organization that collects and cares for contemporary works of art, has several exhibitions: 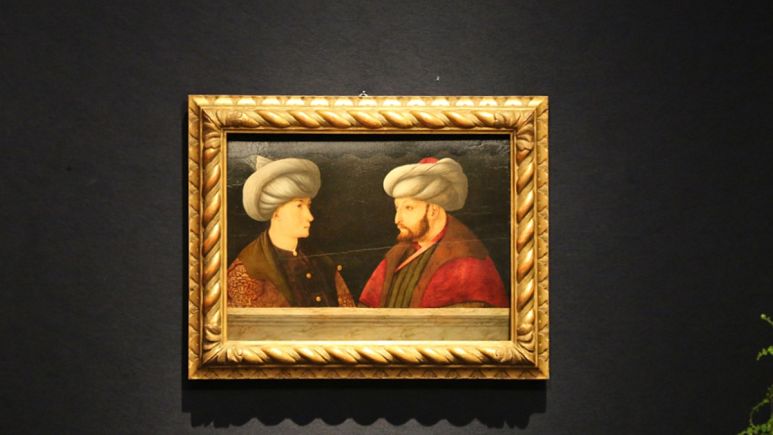 ★ Istanbul Metropolitan Municipality purchasing auction a portrait of the Ottoman Sultan Mehmet the 2nd for $950 million, reports the Anatolia news agency. The London auction house Christie's offered the painting to the bidders. The portrait sold twice the amount that it was expected to sell

The Italian painter Gentile Belline made the portrait in 1480 when the Sultan was 48 years old, just a year before the sultan's death. Painting is approximately 12" x 18".

Sultan Mehmet invited the Italian painter in 1479 to Istanbul. Before he is portrayed was made, Sultan Mehmet asked Bellini to paint others first to test the painter's skills. After he was assured of the artists skills the Sultan had several of his own paintings made.
EXCHANGE RATE

EXCHANGE RATE for the U.S. dollar in Turkish Liras: 6.86
WEATHER
★ Heavy rain and hail affected many regions of Turkey last week causing floods. several people died. A report recently wrote that the number of floods in Turkey has increased 19 times in the past 28 years.

* Results for week: 28 * In games played so far this weekend: * Standing in the league as of week ending 28
ANNOUNCEMENTS