NEWS
★ Various Turkish pollsters are all indicating that Turkish president Recep Tayyip Erdoğan's support is dropping among the public. According to Reuters, to enable his election in the 2023 general elections, President Erdoğan is considering changes to electoral laws to get him elected no matter what.

The Turkish public also did not like his military interventions abroad, which caused confrontations with the United States and European Union.

However, polls also indicate that Mr. Erdoğan is still the top politician in Turkey.

★ Freedom House just released its Freedom in the World 2021 report on Wednesday. In it, Turkey scored 32 out of 100. Any country below score 34 is considered not free.

★ According to the Eurasia Group president Ian Bremmer, as Turkey's economy keeps struggling, Turkey's president Recep Tayyip Erdoğan is likely to become even more autocratic. Mr. Bremmer wrote about his assertion in a Time Magazine article.

To deflect from his failures in the economy and controlling the pandemic, Mr. Erdoğan is picking political battles and other fights, Mr. Bremmer writes.

Mr. Bremmer also claims that in the coming months, Erdoğan may well revert to the kind of quick-fix economic policies that made Turkey so fragile in the first place.

Again, to divert the attention of the public, he pledged to mark the 100th anniversary of the establishment of the Republic of Turkey with a space mission to the moon.

The Eurasia group that Mr. Bremmer heads is a political risk consultancy.

★ The Turkish Defense Ministry released a statement and accused the Arab League of disseminating untrue accusations against Turkey. The ministry said that the Arab countries are trying to conceal their own destructive actions.

The Turkish Defense Ministry's statement came after a Wednesday meeting in Cairo of the Arab League. After the meeting, the Egyptian foreign affairs minister called for an end to Turkish interventions in Syria and Libya.

For a solution in Syria, it is necessary to stop the Turkish occupation and defeat terrorist organizations that seek to destroy Syria, Egyptian Foreign Affairs Minister Shoukry said.

In Libya, Turkey has given its military support to the internationally recognized Libyan government, battling a renegade general. However, Egypt and a few other Arab countries are supporting the renegade general.

In related news, Arab News reported Thursday that a Turkish warship prevented the European Union naval mission from inspecting a vessel for an arms embargo on Libya imposed by the United Nations.

A Greek navy ship working under Operation Irini tried to check a cargo vessel off the Libyan coast on Wednesday. But its Turkish military escort warned off, according to media reports in Turkey and Greece.

Arab News is an English-language newspaper in Saudi Arabia.

★ According to the Turkish news reports, a military helicopter crashed on takeoff in the Eastern province of Bingöl. At least 11 military personnel died in the crash, one of them an army corps commander.

The helicopter was a German-French-made Cougar put into service in 1996. Experts suspect the cause to be a technical failure related to the age of the vehicle.

★ Turkey's opposition has asked for the cost of the coronavirus vaccines recently. Main-opposition party leader Kemal Kılıçdaroğlu said on Tuesday that officials declared 1 million doses of the Chinese manufactured vaccine as free of charge upon arrival at Turkish customs. However, the Turkish government later purchase them from intermediary Keymen Pharmaceuticals for $12 each.

Those familiar with the company say that Keymen Pharmaceuticals is a Turkish company close to the ruling Justice and Development Party and President Erdoğan. The opposition is accusing that this is another instance of Mr. Erdoğan looking after his supporters in the business world.

Later in the week, Turkish Minister of Health Dr. Fahrettin Koca said he couldn't disclose the cost because it is a confidential business matter.

The opposition responded that when the government pays, it could not be a confidential business matter.

★ A VOA article titled "as Turkey reopens, restaurants relieved but doctors worry" writes that the Turkish Physicians Association is concerned about the easing of pandemic-related curbs. The medical Association points out that the cases are getting higher.

The VOA article says that new daily coronavirus cases in Turkey rose to almost 9900 Monday, the highest since January 11.

★ According to the Euro News, Italian prosecutors are probing a Turkish company in Istanbul for the certificates it issued for Chinese-made facemasks.

The masks were certified as having a 95% filtering rating. However, in checking, Italians found it to be filtering only 50%.

★ According to Bloomberg, Mehmet Hakan Atilla decided to resign from his position as the head of the Istanbul Stock exchange.

Mr. Atilla served 32-month jail time in the U.S. after a U.S. judge sentenced him for his role in a scheme to evade U.S. sanctions on Iran. The U.S. authorities released him in July 2019.

Mr. Atilla was the vice president of the Turkish government-owned bank Halkbank. There is an ongoing trial in the U.S. of Halkbank for its alleged role in busting Iranian sanctions. U.S. prosecutors are saying that Halkbank has laundered around $20 billion of Iranian oil money.

★ Cité Internationale des Arts of France accepted Turkish artist Didem Yalinay to its guest artist residency program, along with only 24 artists from around the world. The French Institute of Turkey had earlier nominated her for the program.

The Cité internationale des arts is an artist-in-residence building that accommodates artists of all specialties and nationalities in Paris. Established in 1956, the Ministry of Culture, Ministry of Foreign Affairs of France, the Academy of Fine Arts, and the City of Paris support it.

Ms. Yalınay is a generative artist who works in academia and art. Progressing with creativity that intertwines science and art, Yalınay exhibits her art projects by setting up generative installations.

The construction workers first discovered the ruins while excavating to build a parking lot. The discovery includes:

- First fortification walls of the city, - Masonry column, and - Remains of the late Byzantine moat walls, as well as - Four coins, - One candelabra and - Many ceramic pieces from the Roman and Byzantine periods.

The excavations also revealed tiles and pottery pieces belonging to the roofs of houses built during the Roman period. Experts agree that the area was historically a business and residential area of ​​the region.

Also, 30 feet outside the existing city walls, the search revealed a monument wall that goes down to 15 feet depth.
★ Istanbul's Pera Museum has started asking to plant trees as a condition to participating in its online tours for the "Crystal Clear" exhibition by cooperating with the TEMA Foundation, a non-governmental organization for reforestation and protecting natural habitats in Turkey.

Those who cannot find the opportunity to come to the museum or want to view it again can join the guided exhibition tour by buying an electronic certificate on the TEMA Foundation website for planting trees.

The tours are in Turkish. 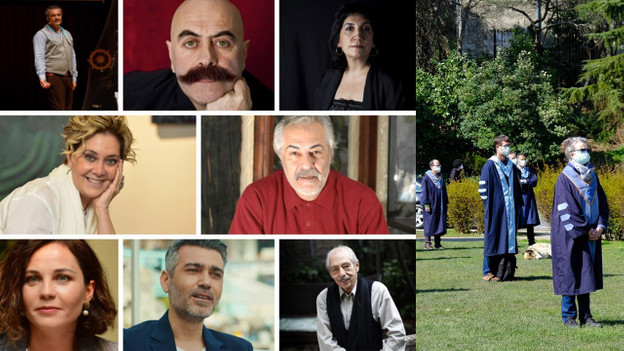 ★ Some 262 theater actors from Turkey released a statement supporting the Boğaziçi University community on March 4, a little over two months after President Recep Tayyip Erdoğan appointed a party member the president of the prestigious school.

The Boğaziçi community has continued their protests against Melih Bulu, Erdoğan's appointment, despite state response, including police brutality and hundreds of detentions.

Resisting the politically-motivated president appointment is the university's most natural right, especially considering that Boğaziçi has been such an academically rich environment thanks to its culture of democracy, the actors said. 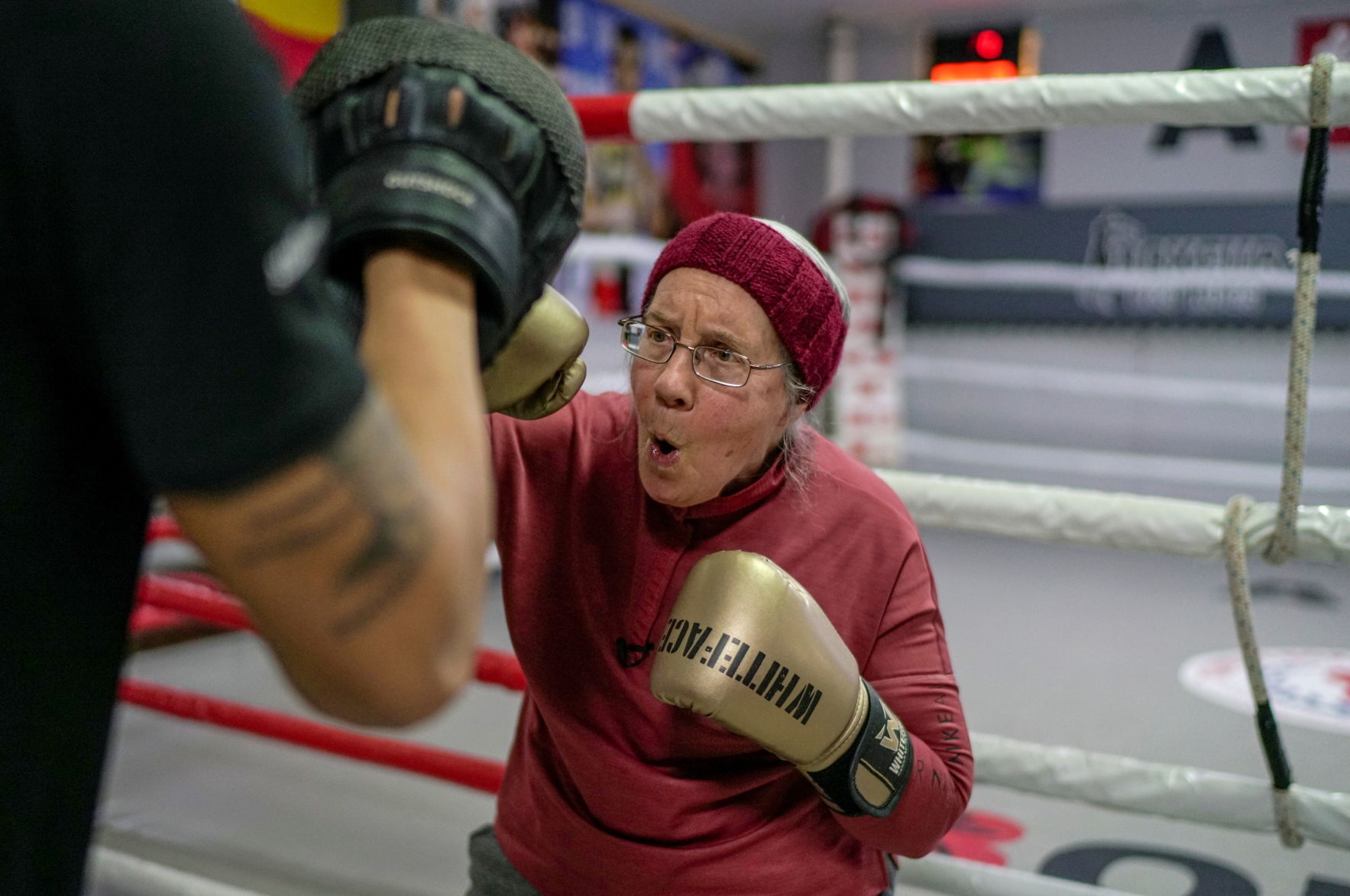 Six years after her diagnosis, the Belgian woman who lives in Turkey, discovered the benefits of non-contact boxing by chance while researching the disease.

Since then, she has been perfecting her punching by going to a gym three times a week.

"If you are more than 50 years old, they really look at you like this: 'What are you coming to do here?' But they are gentle from the heart, the Turks. So they let me do it," she told Reuters. Born in Mersin on April 22, 1933, Suna Tanaltay graduated from Istanbul University, Faculty of Literature, Department of Psychology in 1957 and received a psychiatry certificate from Çapa Faculty of Medicine.

Suna Tanaltay, frequently interviewed on TRT radios and private radios, published daily and weekly columns in dailies Günaydın and Posta. In 1948 the daily Akşam featured on its art page her first work, The Fig Tree. Later her poems, essays, and psychological comments were published in many newspapers and literary magazines.
SPORTS