NEWS
★ The Taliban said Friday its leaders had already conveyed to Turkey their opposition to any foreign troops remaining in Afghanistan after the U.S. and NATO forces leave the war-torn country by a September 11 deadline, VOA reports.

The Taliban statement comes a day after U.S. officials said President Joe Biden and Turkish President Recep Tayyip Erdoğan met on Monday and agreed that Turkey would continue providing security at the international airport in the Afghan capital Kabul following the troop pullout.

★ In related news, the Turkish president met on the sidelines of a NATO meeting with President Biden.

Both sides did not have a press release, so the topics they discussed are not known well.

President Erdoğan said a few sentences about the meeting in response to journalists. After this, the opposition in Turkey claimed that the meeting was a failure for Erdoğan.

★ Over 1,000 women from across Turkey hold a rally in Istanbul on June 19, urging President Recep Tayyip Erdoğan to reverse his decision to withdraw from an anti-violence treaty ahead of a formal exit on July 1.

Mr. Erdoğan sparked outrage in March with the move to pull out from the first global binding treaty to prevent and combat violence against women, known as the Istanbul Convention.

★ According to Associated Press, a court sentenced a Turkish police officer to nearly 17 years in prison for the murder of a teenager. The officer hit the teenager in the head with a tear-gas canister in 2013.

Berkin Elvan was in a coma for 269 days. His death in March 2014 at age 15 led to a flare-up in protests. The family of Elvan said he was out buying bread, not protesting.

But Turkish President Recep Tayyip Erdoğan, who was then prime minister, claimed Elvan was among the "terrorists" at the protests with his face concealed and argued police had no way of knowing his age. 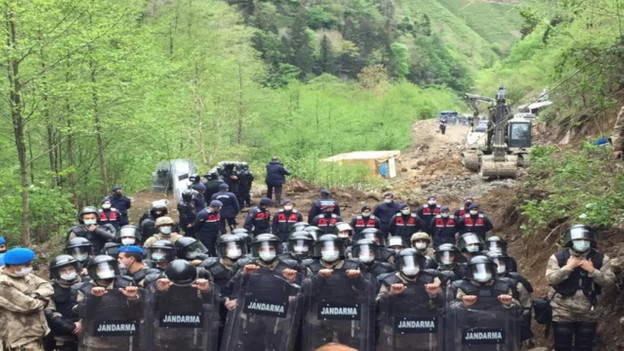 ★ Turkish rural police on June 18 detained a villager who has been protesting the construction of a stone quarry by a pro-government company in İşkencedere Valley in the Blacksea province of Rize.

The detention came after the villager slammed the government for issuing monetary fines to locals.

He is now facing charges of making terrorist propaganda.

Locals of the İkizdere district have been for weeks staging sit-in protests at the İşkencedere Valley since Cengiz Holding started its work under a nationwide lockdown on April 23.

★ A Greek court sentenced an elected Muslim official in the Western Thrace region of Greece to 15 months in prison on Thursday, in what many say, in an attempt to suppress the ethnic Turkish minority of the country.

A criminal court in Thessaloniki charged Ahmet Mete, the Muslim cleric or mufti of Xanthi, with disrupting public order by sowing public discord.

He received a three-year deferment of the sentence, which may see him imprisoned if courts charge him with another crime during the three years.

Xanthi, a city in Western Thrace, northeastern Greece, has a large population of Turkish-speaking Muslims dating back to the Ottoman period.

★ An attacker killed a volunteer at the pro-Kurdish Peoples' Democratic Party offices in Izmir on the Aegean coast, the third-largest metropolitan area in Turkey.

Turkish police apprehended Onur Gencer, who the press described as a right-wing extremist.

Turkish opposition claimed that his violent act resulted from the months-old campaign by the ruling coalition against the pro-Kurdish Peoples' Democratic Party.

The coalition partner extreme-right Nationalist Action party wants the Peoples' Democratic Party closed. It claims that the party is supporting the Kurdish insurgents.

According to the statement, the patented Radio Intelligent Controller technology of Netsia, a subsidiary of Türk Telekom Group company Algera in the United States, will be integrated into the product portfolio of Juniper.

"The widespread use of foreign-currency borrowing by Turkish corporates make them among the most exposed to exchange rate movements," Fitch added on Wednesday. ★ 11-year-old Defne Ekmekçi, from Turkey's South Eastern province of Şanlıurfa, became the world champion by standing out among 250 contestants in the Child and Youth Creativity Music Competition. Organized in France, the competition took place online.

Defne Ekmekçi also won the title of International Piano Student and is the only one in Turkey in this field. The Şanlıurfa Metropolitan Municipality gave her an award also. ★ Turkish Ministry of Culture and Tourism will support private theaters for the new art season. The ministry made amendments in the Regulation on Aids to the Projects of Private Theaters.

The private theaters can now apply for state aid for the 2021-2022 season through July 15. This date is a new earlier one to enable theaters to receive funds before the season starts.

One of the criteria that the ministry will use is if the theater staff has Social Security insurance.

★ Due to the pandemic, the number of people attending movie theaters, and performance arts venues in Turkey decreased significantly last year.

Turkish Statistical Institute announced the attendance statistics for these venues for 2020. Here are some highlights:


★ The Presidency of the Trabzon Chamber of Commerce and Industry held the Black Sea Salmon Flavors Festival to promote Turkish salmon, reports the Turkish Radio and Television.

Visitors to the Festival got to taste salmon dishes with different flavors by 17 chefs.

Turkish salmon, distinguished from others by its taste and color, are becoming more available in the international markets day by day. ★ A terracotta female figurine and male figurine head, two terracotta pots, and two amphorae (jug) of Anatolian origin were voluntarily returned from France and the U. S. to Turkey.

The Turkish Ministry of Culture and Tourism stated that they bring 4,862 artifacts to Turkey since 2003. The work to prevent cultural property smuggling and to recover smuggled artifacts made the repatriation of artifacts possible.

The ministry noted that 423 of the objects had come back to Turkey in the first six months of this year. Among these objects are: ★ During excavations in the Ancient City of Metropolis in Izmir, the third-largest metropolitan area of Turkey, archaeologists found an 1800-year-old headless statue depicting a young woman. Excavation Director Dr. Serdar Aybek said, "This is a work made in the style of the metropolis."

In the excavations, there are traces of the works of many civilizations from the first settlements in the Late Neolithic Age to the Classical Age, from the Hellenistic Age to the Roman, Byzantine, Turkish beyliks, and Ottoman periods. ★ A boat trip visually documented the mysterious structures under the historical Istanbul peninsula. The peninsula is host to historically significant structures such as Topkapi Palace, Hagia Sophia Mosque, and Hagia Irene Church.

Arzu Ulaş examined 285 underground structures in a three-year study. The study revealed that cisterns that met the water needs of Istanbul for centuries were in a deserted state. During her work, Ulaş roamed the water channels below the peninsula with boats. Ulaş walked the water channels step by step and passed through some points by crawling through narrow passageways.

At the same time, this study revealed the mysterious and legendary tunnels and escape points of Istanbul, the subject of many stories. Arzu Ulaş said that she set out with the idea of shedding light on the underground structures of Istanbul.

"The cisterns met the great water needs of the people at the time. And now they are in a state of disrepair," she added.

"Cisterns are both artistically and architecturally unique structures for the city. They are important as the point of water storage and distribution in Istanbul since antiquity," she added.

Ulaş said that her study prepared a map of Ottoman waterways for the first time in history.

★ Turkish food entered the U. S. educational curriculum. Chefs from Izmir teach at the University of Las Vegas online. The program aims to increase the export of food products.

Turkish cooks give recipes using only food products grown and exported in the Aegean region of Turkey.

The Turkish Aegean Exporters union has given support to the project. The project partners are the Izmir University of Economics and the University of Las Vegas. The chefs from the two universities work together in the online courses. The subject is, of course, Turkish food.

Within the scope of the five-year project, educators will also describe the historical development of Turkish food, the nutritional values of the ingredients, and the characteristics of the geography in which they are grown. ★  Within the scope of the events celebrating the anniversary of the establishment of the Turkish Red Crescent, the ministries of Culture and Tourism, and Transport and Infrastructure have illuminated the symbolic structures of Turkey with the red color of the Red Crescent.

The Sphinx Gate of the Alacahöyük Ancient City in Çorum, one of the first official archaeological excavations of the Republic, was also colored with red light. ★ In Denizli, located in the Aegean region of Turkey, the Directorate of the Anti-Smuggling and Organized Crime Branch and the rural police teams have seized several missing historical artifacts.

Among these artifacts are fragments belonging to a golden crown. Experts think that it belongs to the Roman period. The teams detained two suspects and handed over the artifacts they seized to the Museum Directorate.