NEWS
★ According to the Turkish daily Duvar, the Turkish government allocated only $96,000 in local currency for earthquake preparedness work in Istanbul.

Scientists predict a massive jolt in Istanbul's vicinity anytime and a major catastrophe.

The environment and urbanization minister Murat Kurum says they have tested only 3200 public buildings for earthquake endurance.

★ Turkey will be required to pay a carbon tax to the European Union unless it ratifies the environmental protocol Paris Agreement before December, the news portal Bianet reported on September 2.

Turkey is among the first signatories of the Paris Agreement but has not yet ratified the agreement.

★ Prominent journalist Murat Yetkin analyzed the September 1 speech of President Recep Tayyip Erdoğan that his government is planning to come up with a draft for a new constitution in the first months of 2022.

Yetkin reminded that today's parliamentary arithmetic does not allow Erdoğan to amend the constitution without going to the opposition if he wants a change.

A new constitution or amendments to it requires 400 votes out of the 600-member Turkish Parliament. A referendum requires at least 360 votes.

The ruling People's Alliance of the Justice and Development and Nationalist Movement parties currently has 336 seats. The alliance needs 24 more seats, even to submit the draft to the public vote.

★ Ruling Justice and Development Party deputies emphasized during a September 1 meeting that a new social media regulation they are drafting should not contradict the constitutionally-protected freedom of expression, the daily Cumhuriyet reported on September 3, 2021.

Drafted after President Recep Tayyip Erdoğan announced his party would launch a "truth operation" against the fake news he claimed the opposition dispersed, the bill foresees prison sentences for persons accused of spreading "disinformation" on social media.

Many people worry that if adopted, the regulation will significantly curtail freedom of expression and dissemination of unbiased news, which has already suffered under the Justice and Development Party rule.

★ The Environment and Urbanization Ministry has allocated 97 percent of its budget for buying official service cars for the municipalities run by the ruling Justice and Development and the Nationalist Movement parties, the daily Cumhuriyet reported on September 3, 2021.

★ According to a study conducted by the Confederation of Revolutionary Trade Unions of Turkey Research Center, 3,613,000 full-time jobs were lost during the COVID-19 pandemic, with women being the most affected.

Experts criticize the Turkish Statistical Institute, a government agency, for failing to report the epidemic's effects on unemployment.

According to the Institute's calculation, unemployment decreased during the epidemic period, and there were significant increases in employment.

Turkish government's Statistical Institute calculated the rate. Independent scholars say that the actual rate is around 35%.

The main driver of the inflation was food and non-alcoholic beverages at 29 percent, which observed the highest year-on-year price increase since April 2019. 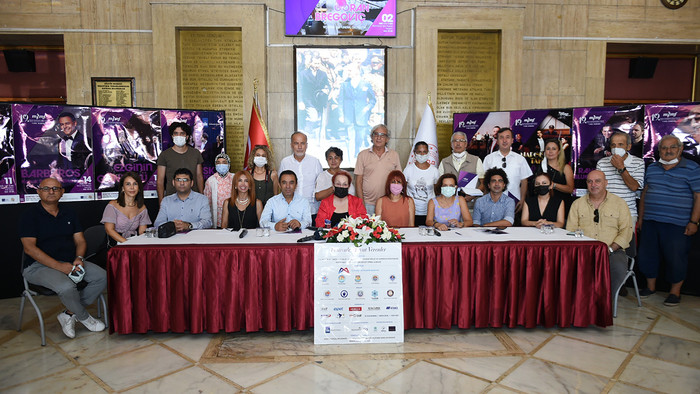 ★ Organizers announced the program for the 19th Mersin International Music Festival, Merfest. This year Merfest will start on September 11.

Selma Yağcı, the chair of the Steering Committee, said Merfest was not on last year due to the pandemic.

Merfest has brought together soloists and musical ensembles from Azerbaijan, Netherlands, Serbia, Bulgaria, and Turkey this year, she added.

The festival will open its curtains with Ceyla Ganiyeva on the violin. Ganiyeva is a rising star of classical music. Led by Uzbek Conductor Rustam Rahmedov, the Mersin State Opera and Ballet Orchestra will accompany the artist. The performance will be held free of charge at the Mezitli Municipality Amphitheater on September 11. 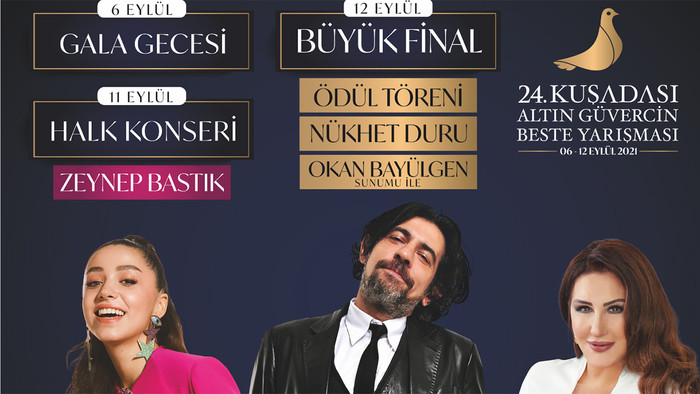 ★ Kuşadası Golden Pigeon Composition Competition is getting ready to take off for the 24th time. The event brings together Turkish pop music composers.

The Golden Pigeon Documentary will also meet the audience for the first time as part of the 24th Golden Pigeon Composition Competition. The event will start with a gala event in Kervansaray on September 6.

The premiere of the documentary about the history of the Golden Pigeon, performed by Okan Bayülgen with his unique style, will take place on September 9.

The documentary will also be screened again on September 10 and 11.

The 24th Golden Pigeon Composition Competition will end on September 12 at the Kuşadası Altın Güvercin Amphitheater with the final night where Nükhet Duru, one of the veteran names of Turkish pop music, will take the stage. Okan Bayülgen will host the night. The ten finalists determined by the preliminary jury will perform in front of the grand jury for ranking.

After bestowing the traditional honor award to Nükhet Duru, the top three composers will receive their awards. 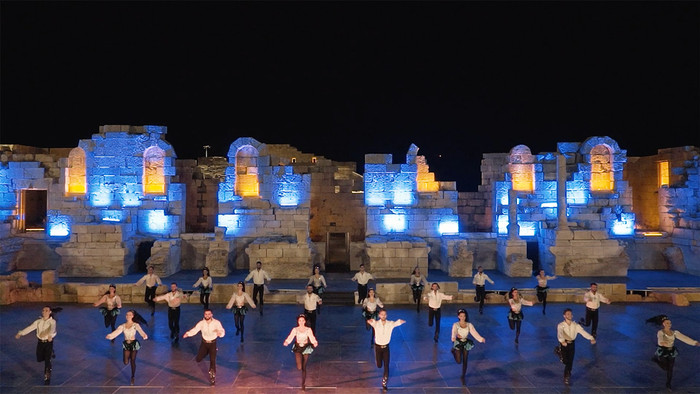 ★ The summer season activities of İş Sanat continue with "Dance in Patara."

Patara is an ancient city in Turkey's Mediterranean region.

The Fire of Anatolia Dance Group, directed by Mustafa Erdoğan, will be performing the show. One can also watch the show on İş Sanat's YouTube channel and website.

With its 32nd year excavations, Patara not only sheds light on the ancient past of Anatolia, the cradle of civilizations but also contributes to the cultural heritage of the world. 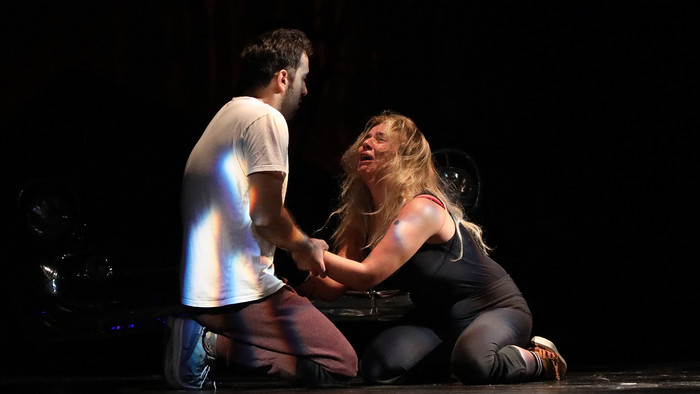 Adapted from the play of the same name written by Sophocles thousands of years ago, the play tells the story of Antigone, who is determined to make his last mission to his two brothers. The two brothers kill each other in the same war. One is declared a hero and the other a traitor.

"Antigone," while all the ancient experiences of humanity buried in history, still brings our unresolved and not lost contradictions to the stage.

The city theaters performed the play for the first time at Harbiye Muhsin Ertuğrul Stage on Wednesday, September 1.

It will continue to be on the stage at different theaters throughout the metropolis until September 18. 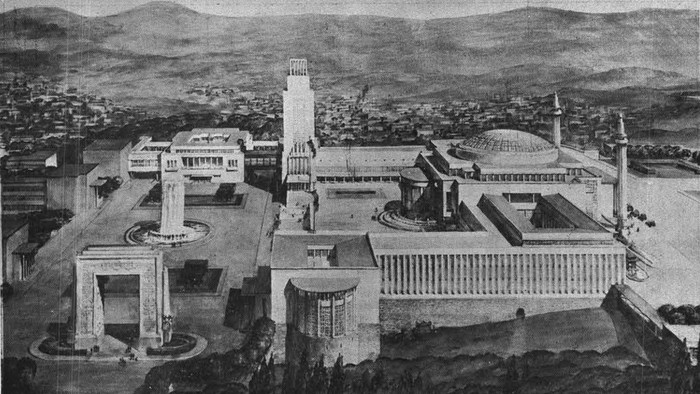 ★ An exhibition on the unimplemented projects of Hungarian architects has opened in Turkey's southwestern Aegean city of Bodrum.

Researchers and academics contributed to the preparation of the exhibition, aiming to shed light on the architectural world from the last years of the Ottoman Empire to the first 50 years of Turkey.

The exhibition makes it possible to see and interpret the building projects designed by famous Hungarian architects but not implemented. In a way, these communicate with each other. Many German, French and Austrian architects worked in the first period of the Turkish Republic.

The designs of Hungarian architects, presented as projects but not implemented, are as follows:

1856 - Imre Henszlmann: A church in Istanbul to commemorate the British soldiers who lost their lives in the Crimean Wars, submitted to the project competition, under the pseudonym Soli Deo Gloria - Beyoğlu, Istanbul

1938 - Ferenc Hillinger: Sketch of a residence on the Bosphorus, Istanbul

The exhibition will be on September 10 through 27. 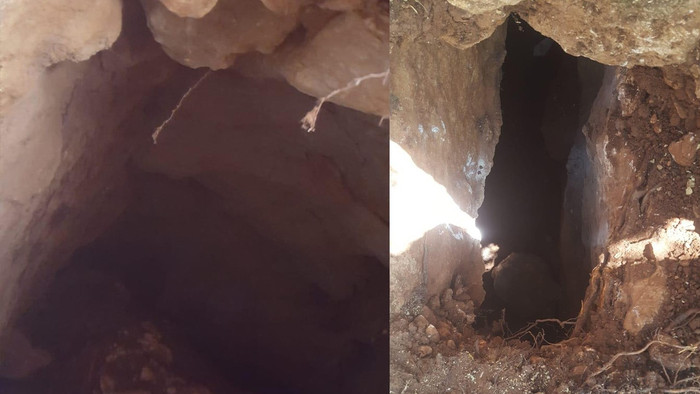 ★ A Turkish man found an underground tunnel from the medieval period while digging up a cesspool in the southeastern province of Adıyaman.

State officials measured the length of the tunnel at 265 feet and noted that the structure split off in three directions, each of them around 65 feet long, although precise measurements were not possible. ★ Excavations at Arslantep Mound in Turkey's southwestern province of Malatya have revealed 24 graves and the ruins of six houses dating back to 5600 to 5700 years ago, TRT reports.

The province governor Aydın Baruş visited the site and received information from the head of the excavations, Dr. Francesca Balossi Restelli, and the previous head Dr. Marcella Frangipane.

Both Dr. Francesca Balossi Restelli and Dr. Marcella Frangipane are professors at the University of Rome in Italy.

The mound is on the UNESCO permanent List of World Heritage. The heritage list describes it as follows:

"Archaeological evidence from the site testifies to its occupation from at least the 6th millennium BCE, up until the late Roman period.

"The earliest layers of the Early Uruk period are characterized by adobe houses from the first half of the 4th millennium BCE.

"The most prominent and flourishing period of the site was in the Late Chalcolithic period. The civilization living there then constructed the so-called palace complex.

"The archaeological stratigraphy then extends to the Paleo-Assyrian and Hittite periods, including the Neo-Hittite levels.

"The site illustrates the processes which led to the emergence of a State society in the Near East and a sophisticated bureaucratic system that predates writing.

"Exceptional metal objects and weapons have been excavated at the site, among them the earliest swords in the world, which suggests the beginning of forms of organized combat as the prerogative of an elite, who exhibited them as instruments of their new political power. " ★ Assos was one of the important harbor cities of the ancient world. Archaeological excavations there revealed footprints dating back to 1300 years ago, TRT reports. The footprints are at the base of a bread oven and belong to a toddler.

Assos, established in the 10th century BC, is in Turkey's North Western province of Canakkale. In the late 1800s, American archaeologists carried out the first excavations at the antique city. Since 1981 Turkish archaeologists have been leading the digs.

The Acts of the Apostles refers to visits by Luke the Evangelist and Paul the Apostle to Assos.

The head of the excavations is Dr. Nurettin Arslan of the Çanakkale Onsekiz Mart Üniversitesi archaeology department. He says that the earlier work by the Americans destroyed most of the remains.

EXCHANGE RATE for the U.S. dollar in Turkish Liras: 8.31
WEATHER

★ In the Tokyo Paralympics games, Turkish athletes increase their medal count to 15.

Here are some highlights since last Saturday:
★ Turkish team came in third in the European Women's Basketball championships.
★ In the 2022 Soccer World Cup European qualifiers, Turkey and Montenegro had a draw in Istanbul.