NEWS
★ As we have reported to you in the past weeks, Turkey opposes Sweden's and Finland's membership in NATO. Turkish President Recep Tayyip Erdoğan claims that both countries are giving refuge to terrorist organizations active in Turkey.

According to Associated Press, on Friday, NATO Secretary-General Jens Stoltenberg spoke to Mr. Erdoğan. He also met with Finland's Prime Minister to alleviate Turkish concerns. Mr. Erdoğan told the Secretary-General that he wants both countries to show that they have stopped supporting terrorists and lifted the arms embargo on Turkey.

The Secretary-General said afterward that the conversation with the Turkish president was constructive and called Turkey and valued ally. He also praised Turkish suggestions to open the core door through the Turkish Straits for grain exports from Ukraine. Russia is currently blocking exports and causing food shortages throughout the world.

★ A new poll by Metropoll Research found that 73% of Turks want to live in a secular and democratic Turkey. 18.5 percent said conservative and authoritarian, and 8.5% did not give a response.

When broken down by party affiliations, 58% of the ruling Justice and development party voters demanded a secular and democratic Turkey. The figure was 75% for the junior coalition member nationalist movement party voters.

Mr. Erdoğan uttered his remarks in a June 1 televised speech. In addition, he said that protesters were rotten to the core.

Analysts claim that Mr. Erdoğan's incendiary remarks are aimed at diverting attention from his administration's failure in the economy.

Gezi Park protests initially began in Istanbul in May 2013 as a reaction to the urban development plan of the ruling Justice and Development Party. It aimed to construct a replica Ottoman barracks on the city's few remaining green spots. The protests later grew into nationwide protests and spread to other cities at 90 locations.

At least 7 1/2 million Turks actively participated in the protests.

★ According to the daily Duvar, as part of a new operation targeting the People's Democratic Party, the justice and development party-led Turkish government issued detention warrants for several politicians of the party, including Istanbul, Bingöl, and Edirne provincial heads.

The People's Democratic Party mainly gets its votes from Turkey's Kurdish population. Selahattin Demirtaş, One of its previous leaders, has been in jail since 2016. Mr. Erdoğan's administration also removed 60 mayors elected from the party from office.

★ According to Deutsche Welle, a bill now before the Turkish parliament that purports to want to combat "fake news" is being sharply criticized for potentially expanding the control of the government over the internet and the media.

If enacted, the law could allow the government to further narrow down journalistic activities, critics say.

Deutsche Welle adds that, in Turkey, almost 90% of national media is already controlled by the government, and critical media outlets are under heavy financial and judicial pressure. The newly proposed bill aims to target social and online media — a space the government hasn't been able to entirely control until now.

★ VOA's Dorian Jones wrote on May 31 that tensions are rising between Turkey and Greece, with the Turkish foreign minister on Tuesday warning that it could challenge the sovereignty of Greek islands.

The threat comes as both sides increase their military presence in contested waters of the Aegean Sea.

★ According to Al Jazeera hundreds of Lithuanians contributed to a fundraiser to buy an advanced military drone for Ukraine in its war against Russia in a show of solidarity with a fellow country formerly under Moscow's rule.

The target of 5 million euros ($5.4m) was raised in just three and a half days in Lithuania – a country of 2.8 million people – largely in small amounts to fund the purchase of a Bayraktar TB2 unmanned aerial vehicle from Turkey.

Ukraine has bought more than 20 Bayraktar TB2 armed drones from Turkish company Baykar in recent years and ordered a further 16 on Jan. 27. That batch was delivered in early March.

★ According to news reports, Turkey wants to change its name in English to Türkiye. For many decades various groups from Turkey advocated this change. It is the first time that the Turkish government started advocating for it.


★ According to Turkish daily Duvar, the government-run Turkish Statistical Institute reported that the inflation rate in May was 73.5%. The independent inflation research group ENAG announced it as 161%.

In the meantime, Bloomberg reported that the head of the consumer price department at the Turkish statistical Institute quit his position amid an ongoing debate about the institution's credibility. It is the second resignation of a senior official in charge of inflation data.

★ According to Reuters, another 9% plunge in Turkey's lira this month and debt market danger gauges at levels last seen during the 2008 global crash have prompted investor concerns that a fresh crisis might be brewing.

Reuters writes that whether President Tayyip Erdoğan's government can avoid market turmoil, just five months after the last bout, will have implications for his re-election prospects - and for a potential return of foreign investment if he loses. 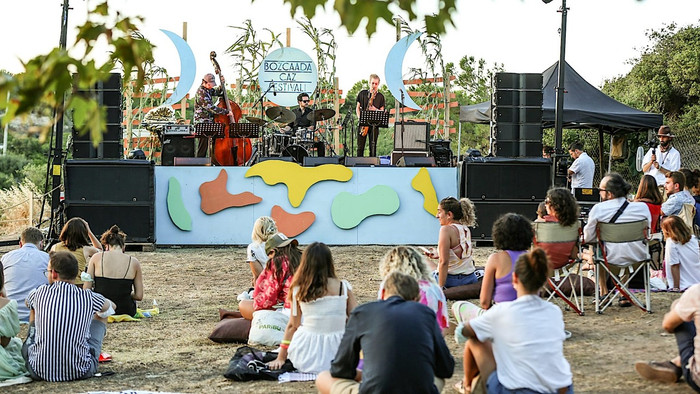 ★ The 6th Bozcaada Jazz Festival will take place between August 26-28. Bozcaada is a Turkish island in the Aegean Sea.

The program is organized in cooperation with the member institutions of the Europe Jazz Network.

The following artists and bands are taking part.

On August 26, the Almagest Quintet, Shishani & Miss Catharsis, and Yeni Türkü bands will take the stage.

Akköy is a village in Turkey's Western province of Denizli.

Nezih Başgelen conveyed the status of the mosque, which should be protected as a Cultural Heritage, to the civil and administrative authorities.

Authorities took the building under protection as a historical heritage site. The mosque contains exquisite tiles and woodwork dating back to the Ottoman Empire. Its construction date is unknown at this time. ★ The virtual version of the Agora of the Ancient City of Smyrna in Turkey's Aegean city of Izmir's Konak district, reflecting the Roman period, will meet with visitors next month.

The ancient city has a history of 2500 years.

Archaeological excavations were started here in 1933 and re-started in 2007. It continues under the chairmanship of Dr. Akın Ersoy.

The Provincial İzmir Association started the "Cultural Heritage Lives Project" for the promotion of the Agora. The virtual content is modeled after the Roman Agora.

In the experience center created for the Ancient City of Smyrna, visitors will be able to visit the site on the internet with virtual reality glasses as of next month.

The team of seven sculptors and archaeologists is preparing a 1/100 scale model of the ancient agora. Project Coordinator Şebnem Yurdakul said, "It is one of the largest agoras in the world and also has the richest Greek graffiti collection in the world with nearly 3,000 graffitis." ★ A shepherd in the Gerger district of Turkey's Eastern province of Adıyaman discovered historical ruins on the banks of the Euphrates River.

In their research on the samples, expert teams determined that the remains were 1800 years old. It turned out that the building was an old military watchtower. the construction began in the 1st century and was used in the Middle Ages.

Providential Museum Director Mehmet Alkan said, "Forts and towers were built on the banks of the Euphrates for defense purposes from the past to the present. This is one of them. We will register and protect it."

Shepherd Ramazan Kılınç stated that he is happy to contribute to the preservation of historical ruins.

★ The only human-faced rock tomb in the world is located in Turkey's southeastern province of Şanlıurfa's Soğmatar Ruins.

There are many rock tombs from the Bronze Age and Roman Periods here. Archaeologists say that this rock-cut tomb structure is different from other altar tombs.

They say that niches and spaces look like details on a human face. According to archaeologists, this tombstone may have been made to be placed in a burial chamber.

★ Restoration works of the 2,600-year-old Temple of Athena ruins in the ancient city of Phokaia in Turkey's Aegean province of Izmir's Foça district are finished.

The restored Temple will be on exhibition at the Izmir Archeology Museum this year.

Experts also examined busts of horses and griffins measuring 4 1/2 feet and 5 feet. Archaeologists found them in 2000. Horse busts are dedicated to the Goddess Athena; griffins, described as eagle-headed mythological birds, are thought to have been hung on the walls to "protect the temple."

İzmir Archeology Museum Director Cengiz Topal said that the Temple of Athena was placed on natural rock and they were also working on mosaic structures.
SPORTS

★ Volleyball: Nations Cup for the Women taking place in Turkey.