Click on photograph to read the full news with photographs


★ Tensions between Greece and Turkey over the divided island of Cyprus appear to be escalating, reports VOA correspondent Dorian Jones. Turkey says it's increasing its military presence on the island in response to Washington's lifting of an arms embargo against the Greek Cypriot administration.

Turkish Foreign Minister Mevlüt Çavuşoğlu criticized the United States Friday for its stance toward Greece, saying it has become a toy of Athens in the Cyprus dispute.

★ According to Dorian Jones, Russia has received another financial blow, with the last Turkish banks ending their support of the Russian Mir payment scheme, as the West steps up its efforts to isolate Moscow over its invasion of Ukraine.

★ According to Reuters, Sweden has resumed military equipment sales to Turkey. Since 2019, Sweden has had a ban on its sales.

When Sweden applied for NATO membership earlier in the year, Turkey objected. Unless Sweden lifts its embargo and cooperates with Turkey in dealing with what Turkish officials call terrorists, Turkish officials said Turkey would not approve Sweden's NATO bid.

Along with Sweden, Finland also wanted to join NATO and received the same message from Turkey.

★ According to Deutsche Welle, Turkish President Recep Tayyip Erdoğan on Friday began legal action against a German politician who labeled him a "little sewer rat," his lawyer confirmed.

Kubicki remarked on Monday while campaigning for next weekend's election in the northwestern German state of Lower Saxony about Erdoğan's refugee policy.

The complaint also suggests Kubicki indirectly accused Erdoğan of using refugees and migrants as a weapon to exert pressure on the West, which his lawyer said is demonstrably untrue.

The police were guarding a hotel.

The Kurdistan Workers Party of the rebel Turkish Kurds is considered a terrorist organization by the European Union, the United States, and Turkey.

Immediately after the attack, officials claimed that one of the attackers was a woman that the main opposition Republican Peoples Party referred to as a journalist in the past. Turkish President Recep Tayyip Erdoğan picked up on this and claimed that the opposition party is a security risk.

According to the daily Duvar, amid accusations by the government of being linked to the attack in Mersin, former People's Democratic Party co-chair Selahattin Demirtaş has said that the party will not "take a step back" from its insistence on democratic politics and peace.

The ruling Justice and Development Party of President Erdoğan and others often claim that the People's Democratic Party is a front For the Kurdistan Workers Party.

★ According to the Turkish daily Duvar, Turkish President Recep Tayyip Erdoğan has said that his "biggest war is with the interest rates" and vowed to pressure the central bank to lower the key interest rate further.

As reported last week, Turkey's central bank lowered the interest rate from 13 to 12%. Economists say that cutting interest rates are wrong when inflation is high. However, Mr. Erdoğan erroneously claims that lower interest rates would bring down inflation. Independent economists calculate the current inflation rate in Turkey as 170%.

On September 28, Turkey's President Recep Tayyip Erdoğan stated: "We pity those who go to other countries just because they have vulgar desires like getting a better car, phone, and going to more concerts," reported the daily Duvar.

Click on thumbnail to see the photographs in the original article
★ Archaeologists concluded the excavations for this year in the remains of a 2700-year-old structure in the ruins of the Urartian city of Tushba, located in Turkey's Eastern province of Van.

The structure is a tunnel 50 feet deep into a hill. Ancients decorated the walls with blue and maroon paintings.

Dr. Mehmet Işıklı, the consultant for the excavations, says that there are no other paintings like these around the world.

Archaeologists sealed the opening to the excavation for the winter. They will resume digging next summer.

This year archaeologists found a bathroom sink decorated with mythological characters and pictures of chambered racing. Experts estimate that the sink is 2500 years old.

Klazomenai was one of the 12 Ionian city-states and an important ceramic ware production center in six century BCE.

Archaeologists find the products they made throughout the Ionian colonies around the Mediterranean, including France, North Africa, and Eastern Mediterranean.

Klazomenai was also a center of olive oil extraction.


★ Archaeologists found dozens of Ottoman-era demitasses in excavations in the agora (marketplace) of the ancient city of Smyrna in Western Turkey.

The ancient city features a grid city plan. The agora is in the center.

Most of the demitasses and shards of plates are from the nearby Kütahya area, renowned for its ceramic ware. Experts estimate them to be 200 to 400 years old.

With the introduction of coffee into the Ottoman domain around the 1600s, the demand for demitasses and other coffee paraphernalia increased.

Some of the demitasses have signatures of individuals thought to be either distributors or artisans.

Archaeologists headed by Dr. Arkadiusz Marciniak uncovered a structure much larger than a typical home.

It is 100 sq. ft. and square in shape. The objects in it are also different than that of a typical home found at the site. There are two raised platforms made from clay.

Experts think that there may be human remains buried underneath the platforms. In next year's excavations, the focus will be on finding what is underneath them.

Çatalhöyük, meaning Forked Mound in Turkish, is an expansive mound of Neolithic and Chalcolithic proto-city settlement in south-central Anatolia, which existed from approximately 7500 BCE to 6400 BCE, and flourished around 7000 BCE.

In July 2012, UNESCO recorded it as a World Heritage Site. 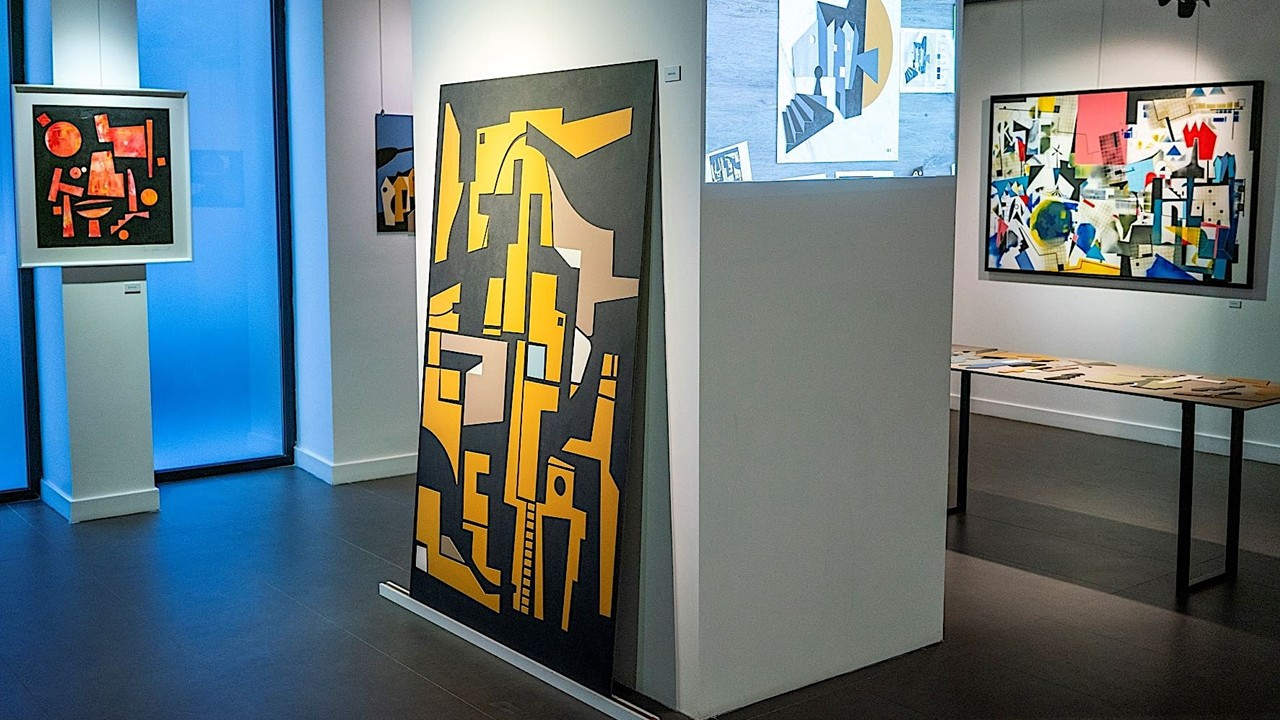 ★ The Kale Group is a ceramics manufacturer in Turkey. As part of its "Look Well at Your World" initiative, there is an exhibition by architect and artist Oğuz Yalım.

The exhibition features works that utilize discarded ceramics and is titled "Escape Point."

The artist says his works are an example of "sustainable art." It is his ninth solo exhibition. 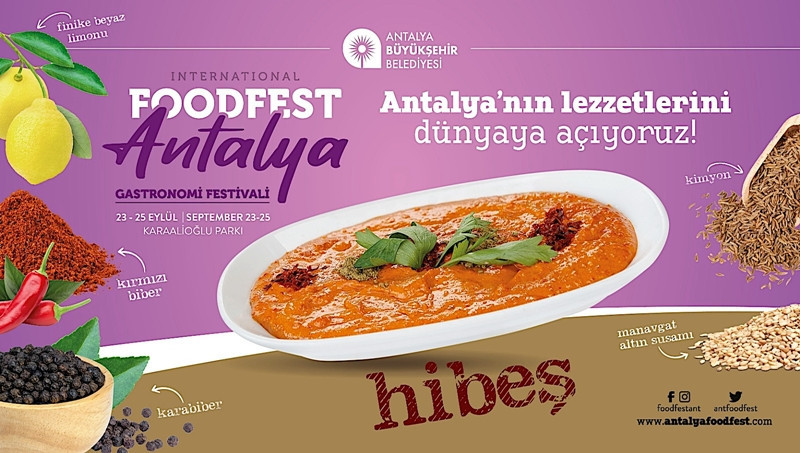 Click on thumbnail to see the photographs in the original article
★ Turkey's Mediterranean city of Antalya hosted the first international Food Fest. The locals were very enthusiastic about the event.

The event theme was sustainability, diversity, and support for local products.

The featured food had a combination of Mediterranean tastes and Anatolian cuisine. The stands at the venue featured local products and food.

Antalya area draws millions of tourists from all corners of the world and is renowned for its sunbathed beaches and warm seas. However, the Metropolitan mayor says there is more to Antalya. For example, the food is excellent. 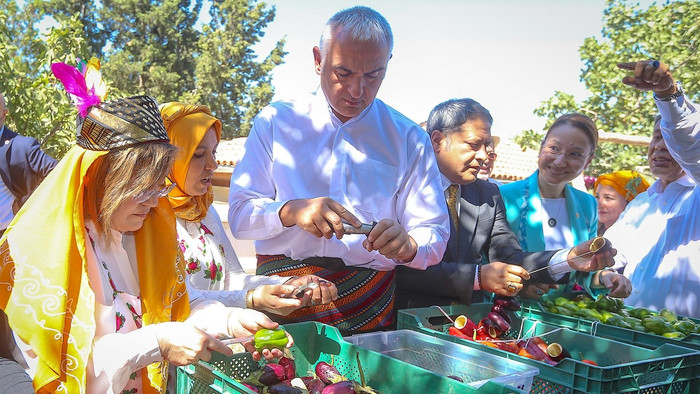 Click on thumbnail to see the photographs in the original article
★ Speaking of food, Turkey's southeastern province of Gaziantep's Gastronomy Festival just ended. One hundred chefs from around the world, some holding Michelin stars, were present.

* Results for week: 7 * In games played so far this weekend: * Standing in the league as of week ending 7
★ Turkey's Merve Pul received a bronze medal in the world college martial arts sports cup. She was fighting in the 76 kg women's category.

So far, Turkish competitors got more than ten medals in the cup.

The event took place in Turkey's Samsun province on the Black Sea.

Our online school is starting in September. There are some innovations in our new term.program, which we will start in September 2022. We have prepared more enjoyable posts with your happy feedbacks from you. > By the principles of language learning; listening, speaking, reading, writing activities > Kitchen Workshop > Anatolian Civilizations > Interactive Games > Periodic Projects > Skill Workshops > Our Holidays > Bodily Activities > Traditional Music > About This Day See you in September, love...